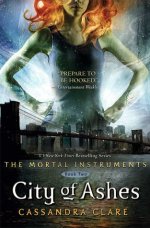 “Mum and Dad won’t be pleased if they find out.”
“That you freed a possible criminal by trading away your brother to a warlock who looks like a gay Sonic the Hedgehog and dresses like the Child Catcher from Chitty Chitty Bang Band? No, probably not.”
- 33%

Clary Fray just wishes that her life would go back to normal. But what’s normal when you’re a demon-slaying Shadowhunter, your mother is in a magically induced coma, and you can suddenly see Downworlders like werewolves, vampires, and faeries? If Clary left the world of the Shadowhunters behind, it would mean more time with her best friend, Simon, who’s becoming more than a friend. But the Shadowhunting world isn’t ready to let her go — especially her handsome, infuriating, newfound brother, Jace. And Clary’s only chance to help her mother is to track down rogue Shadowhunter Valentine, who is probably insane, certainly evil — and also her father.

To complicate matters, someone in New York City is murdering Downworlder children. Is Valentine behind the killings — and if he is, what is he trying to do? When the second of the Mortal Instruments, the Soul-Sword, is stolen, the terrifying Inquisitor arrives to investigate and zooms right in on Jace. How can Clary stop Valentine if Jace is willing to betray everything he believes in to help their father?

In this breathtaking sequel to City of Bones, Cassandra Clare lures her readers back into the dark grip of New York City’s Downworld, where love is never safe and power becomes the deadliest temptation.

Well that was more exciting than I remember and I thoroughly enjoyed picking up on all the subtle little secret hints as to exactly WHO Jace is, or at least who it seems Jace is, from all the PINTEREST SPOILERS I’ve been finding for myself.

There was so much to love in this book. Raphael returning, Simon, Clary and Jace all learning more about themselves and Alec trying to be fearless, but not quite getting there…I think he showed more than he realised though and I hope it came across to the right people!

I didn’t like how Clary was treating Jace at all, but then in the end he has a really good point – he wasn’t listening to her and maybe if he had, she’d have treated him better. I also didn’t like how Simon was treating her either. He was angry at the way she felt, but still tried to push her into feeling the way he wanted her to. (In a way reminiscent of Adrian in Vampire Academy) But I also don’t like Clary’s habit to instantly pick apart and judge other girls her own age, though I guess this is accurate to society right now, cause we can’t have girls liking each other and supporting each other and telling each other they look good, they might stop wasting money on pointless ‘beauty’ products and accidentally take down the patriarchy. So, so far I’m annoyed at the main love triangle, not a bad start! (yes, love triangles and I hate them, but I’m here for Malec – which is also sort of a triangle, but whatever, it’s easier to put up with.)  I have to say I think Clay is annoying me in different ways this time which is nice I guess.

My heart hurt a little bit for Magnus, whenever Alec pushed him away or denied their relationship, that’s got to hurt and I get the feeling that Magnus is more into this that Alec, but I also wonder if that’s really true (more PINTEREST SPOILERS again…). I know Alec sort of stumbled into this relationship – not that he doesn’t want to be there, but more that he didn’t expect Magnus to want him to be there, so I’m not exactly annoyed at him because I know he’s still building himself up for this, but I kind of am a little bit…

As for Valentine, I don’t know what happens to him at the end of all this but it better be freaking good because all this plotting he’s done and the horrors that are hinted at and not yet reacted to are vast! I believe Clary likened him to Hitler and she might just be more right than she knew!

Then we have the Inquisitor. I hope this storyline continues on later, I man I’m guessing a little more of it comes to light at least. I hope we find out what she said to Jace and I hope he gets to understand it too.