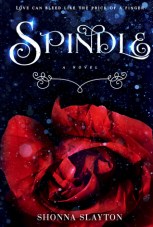 Thank you to Netgalley and the Publisher for the chance to read this book in exchange for an honest review.
Publish Date: 4th October 2016

In a world where fairies lurk and curses linger, love can bleed like the prick of a finger…

Briar Rose knows her life will never be a fairy tale. She’s raising her siblings on her own, her wages at the spinning mill have been cut, and the boy she thought she had a future with has eyes for someone else. Most days it feels like her best friend, Henry Prince, is the only one in her corner…though with his endless flirty jokes, how can she ever take him seriously?

When a mysterious peddler offers her a “magic” spindle that could make her more money, sneaking it into the mill seems worth the risk. But then one by one, her fellow spinner girls come down with the mysterious sleeping sickness…and Briar’s not immune.

If Briar wants to save the girls—and herself—she’ll have to start believing in fairy tales…and in the power of a prince’s kiss.

Two things prevented this book from getting 5 Voodoos so we’ll cover those first. The length. Nothing against long retellings, unless they drag. The first half or so of this one seemed to drag, I think it’s why it took me so long to read it. It wasn’t boring but it wasn’t fast paced enough to keep me hooked and I just kept putting it down and going off to do something else (mostly sleeping, I will shake this!). The second half of the book picked up and was really quite interesting, though there was a moment at the end where I felt like things were being added – again – to drag it out and that was annoying.
My other issue was The End. While everything is pretty much set up for a HEA, it doesn’t actually happen. It’s a fairytale retelling, I want a heavily described HEA thank you very much! None of this implied-and-use-your-own-imagination type endings. Sometimes it’s just nice to read it.

Other than that this was a fascinating story. It had a ‘real world’ setting in America amongst the immigrants and the cotton factories. The cross over actually worked quite well and added an educational and historical feel to the whole affair.
The characters were interesting, but for all the length of the book, not as developed as they could be. I felt that we didn’t really know much about Henry – but then possibly the point was to emphasise what it was that Briar did and didn’t know. I also kept forgetting the names of the twins, which isn’t something that usually happens until I’ve reached the end of the book – possibly because they were refereed to as ‘the boys’ so often?
But the girls attending meetings about Suffrage and Temperance was a fascinating addition. It made Briar an in-between fairytale ‘princess’. Not a sit-and-wait damsel-in-distress nor a slay-the-dragon-yourself she’s supporting her family herself but still needs True Love. I like it.

I do have to say, I felt Briars affections should have been stronger to start with, it almost felt as though she simply put up with Henry and that he was younger than her, then he went adventuring and turned out her was her best childhood friend etc etc. I guess with the timeline of the book it was easier to cover why she was missing him while she was missing him.

It doesn’t seem as though this story is part of a series but it does have a similar sound to some of Shonna Slayton’s other books (Cinderella’s Dress, Cinderella’s Shoes) so perhaps it’s set in the same world? A fantastic and original idea.