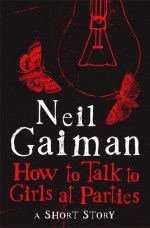 “I could not have told you how old she was, which was one of the things about girls I had begun to hate.”

This was a very short short and like all short shorts there was so much more of the story that was hidden than was actually there. However, unlike with a lot of shorts I’ve read recently, this was done well.

Two boys end up at the wrong party. Really, really the wrong party! They don’t realise at first and we’re never quite told everything because it’s told some years later by the guy who knew the least.

I think that, of Neil Gaiman’s work – of the little that I’ve read – this is perhaps my favourite, which is somewhat odd because usually I dislike vague. But this particular one calls to mind something I’ve written myself and the outsider looking in in this situation was pretty interesting.

The length and nature of this means that it’s hard to give it a genre without giving everything away. There’s also the possibility that someone else would come to a completely different conclusion too! So. not going to force your mind in any particular direction here…