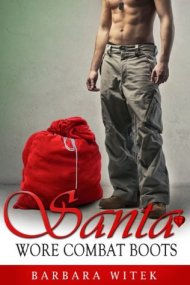 Emma Turner feels like her life ended with the death of her husband. Three years later she’s doing the best she can for her children and moving through life on autopilot. She doesn’t believe true love can happen twice in a lifetime. As a matter of fact, she doesn’t believe in much anymore. Putting her trust in one honest man might be just what she needs to move forward.

Bound by duty Jake Nicklaus never imagined he’d cross the line and fall in love with the woman he swore he’d watch over. If only he’d died on that chopper instead of her husband, she wouldn’t be hurting. The only way to heal her heart is to show her how to live again. Finding the magic in Christmas is the perfect way to start.

Will one kiss under the mistletoe change their lives forever?

I’m not sure how I feel about this story. I liked the concept and it’s vague “A Christmas Carol’ feel it had sort of with the ghost of Christmas past and so forth but the more I think on the storyline the more little bits I come up with that just knock the book down.

I’m pretty sure that at some point Larry would have mentioned his best buddy Jake in AT LEAST one letter home to his wife so that means she either didn’t pay attention or he was more controlling and less loving than he seems? I don’t know, but Emma was actually pretty annoying after the fact, poor Jake. He was perhaps the most sensible of the lot – he just had the misfortune to fall for a doofus,

The writing was also a little odd, like extra words had been added in to make up a word count, words that weren’t needed, for example “She felt a shiver go through her entire body” instead of “a shiver went through her” and things, it was a little off putting as I had to sort of slow down and wade through them. Or maybe it was more that things had been taken out? The white feathers were never explained.
Sometimes simple is just better.

However despite the idiocy these characters seemed to just radiate *cough*EmmaandLarry*cough* There was a happy ending that was quite nice, Jake was just wonderful with the kids.