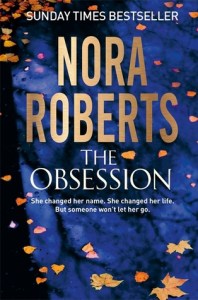 Thank you to Netgalley and the Publisher for the chance to read this book in exchange for an honest review.
Publish Date: 14th of April 2016

Naomi Carson is a survivor. As a child, her family was torn apart by a shocking crime. It could have destroyed her, but Naomi has grown up strong, with a passion for photography that has taken her all around the world.

Now, at last, she has decided to put down roots. The beautiful old house on Point Bluff needs work, but Naomi has new friends in town who are willing to help, including Xander Keaton – gorgeous, infuriating and determined to win her heart.

But as Naomi plans for the future, her past is catching up with her. Someone in town knows her terrifying secret – and won’t let her forget it. As her new home is rocked by violence, Naomi must discover her persecutor’s identity, before it’s too late.

I think I have to start by admitting this is my first Nora Roberts book. I know, shocking right? Especially as Nora Roberts is one of Paein’s favourite authors, has been writing forever and has written a huge number of books that span a number of genres, but perhaps these are part of the reason I haven’t picked one up before. It’s always hard to know where to start when there’s so much choice and even when your friend recommends a book there’s always that daunting factor… what if I don’t like it? Anyway, I can tell you that my first impression of Nora Roberts is a good one. The Obsession is an indepth thriller-romance which was powerful and gripping, right from the very first page and if this is what I should expect from the rest of Roberts’ work then I will definitely be checking more out!

The Obsession introduces us to Naomi, a young girl who discovers her father isn’t a good man. Naomi has to be braver than any 12 year old should ever be and stand strong as her family is torn apart by the aftermath. I found this part of the story really interesting because of how each character dealt with the situation and how they were shaped by it. I loved that Nora Roberts wasn’t graphic with her descriptions but allowed the reader to interpret the situation, giving everything a much more sinister feel, in my opinion.

We then follow Naomi as she tries to leave her past behind her. She travels from place to place never feeling comfortable until she finds Point Bluff, which she instantly falls in love with. Could this be the new start she has been looking for?

This part of the story was a lot slower. I liked the contrast but must admit, it dragged on a bit. There was a lot of place setting, character development etc which was really well done but after the tension, built up in the first part, it was a little underwhelming. Everything seemed to pretty, to perfect and apparently this was what Nora Roberts wanted me to think because, suddenly, the story starts to get darker again as a local turns up dead. It broke through the calm and peaceful feeling and tainted everything with an uneasy feeling. This was clever, really clever.

I loved the romance between Naomi and Xander. God this man was sexy as hell. He radiated confidence and determination, something I really like in a male lead role. Naomi herself, was a great main character. She was strong but real if that makes sense. She had doubts and moments where she let her vulnerabilities show but didn’t let them take her down. I loved all the little details that Nora Roberts added to give the characters extra depth, such as the choices in paint, food, clothes, everything helped give a great sense of being.

The only problem for me, which prevented me from giving it 5 stars, was that the ending seemed too rushed. I was disappointed by the clumsiness of the culprit, and how easily everything was tied up. I wanted more of a struggle, more danger, more something but, in the end, it all seemed too easy.

I would definitely say this book is heavier on the romance than thriller but I’d still recommend it to lovers of both genres. All in all, I can see myself definitely reading more by Nora Roberts in the future.