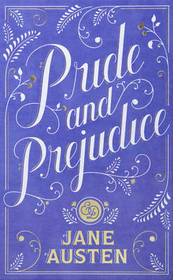 “I cannot fix on the hour, or the spot, or the look, or the words, which laid the foundation. It is too long ago. I was in the middle before I knew that I had begun.”
-Page 367

‘It is a truth universally acknowledged, that a single man in possession of a good fortune must be in want of a wife.’ Thus memorably begins Jane Austen‘s Pride and Prejudice, one of the world’s most popular novels. Pride and Prejudice–Austen’s own ‘darling child’–tells the story of fiercely independent Elizabeth Bennett, one of five sisters who must marry rich, as she confounds the arrogant, wealthy Mr. Darcy. What ensues is one of the most delightful and engrossingly readable courtships known to literature, written by a precocious Austen when she was just twenty-one years old.

Humorous and profound, and filled with highly entertaining dialogue, this witty comedy of manners dips and turns through drawing-rooms and plots to reach an immensely satisfying finale. In the words of Eudora Welty, Pride and Prejudice is as ‘irresistible and as nearly flawless as any fiction could be.’

(I didn’t read my leather bound copy, but it has a far prettier cover so I’ve used that here!)

I’ve wanted to read this book for a while but I’ve been worried I’d dislike it due to difficult language and I really didn’t want to hate the book as I’ve loved the story in the various adaptions I’ve watched.
Having read the Lady Helen books (Dark Days Club and Dark Days Pact) which are set in the same time and wanting to stay with regency times a little longer I felt it was the perfect time to read it. [It was also Romance week!]

I’m so pleased to report that while I did indeed find parts of it hard work, I also thoroughly enjoyed it!
My copy had the story split into three sections for some reason. I first was the hardest part to get through – the set up of the story and the people. It started to get more interesting about halfway through the second part. The Wickham scandal and the trip to Derbyshire.
“Volume the third” – as it’s called – was by far my favourite! In which we meet Mr Darcy again – after his letter to Elizabeth – when she is finally aware of his true character.
I liked watching the change in Elizabeth and her feelings, though it was harder to perceive the change than I’d thought it would be, thanks to my inability to follow some of the language.

What I liked most about this story is the changes in Elizabeth and Darcy and their assumptions of each other. Darcy’s understanding of Elizabeth was far more accurate than hers of his however, but isn’t that always the way of shy people? Being thought of as distant or rude?
I also liked that he took her advise and though her criticism was wrongly placed he still took it to heart and worked on his perceived flaws so that he could be a better person the next time they met. I also like that he wasn’t put off despite what she said – some men would have been horrendously insulted and become quite angry and bitter.
Usually not giving up is more creepy than anything else, but in this instance the man she despised was not the man he was and he did nothing more intrusive than being his true self.

I can only wish to gain a better understanding of the language of the book so that I can get more out of it the next time I read it.

Does this book have any good retellings or ‘variances’ ? I’ve seen some around but none that I’ve seen about have been quite up to par. Either the writing is terrible or the behaviour in the book is not Regency standard…I of course have Pride and Prejudice and Zombies to read later in the year!