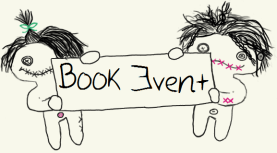 In which Paein rambles about her day, gushes about who she met and generally discusses her perceived failures and regrets.

I went to YALC for the Friday.
It was a birthday gift from a friend, who came with me – thank goodness!
You may have noticed that I am rather socially awkward, I have little idea how to talk to people – unless I have a pre-written script or a task to focus on! Sometimes I even have trouble socialising with my friends, so a room full of strangers was pretty ack.
Generally I go places with someone so that they can start and/or maintain conversations and I can join in as and when because when I have time to think about it, I’m far better at being polite.

I went with little to no plan – never having been before I didn’t really know what to expect so we wondered for a little, I didn’t really approach any stands because people. But I did buy a matching set of Bone Season and The Mire Order because matching is best. I was tempted with a pretty version of The Song Rising with yellow dyed pages but was a hardback not a paperback so I didn’t get it. My friend got the Throne of Glass colouring book and some items from Geeky Clean and that was pretty much us done with the buying.
We got to the signing section in time to join the queue that had already formed to meet Alwyn Hamilton. We were lucky because by then the queue was so long that after us they started issuing tickets and turning people away to come back later.

Alwyn was the best person to meet first. She was so happy and nice and easy to talk to and I left her far more relaxed (possibly because she was familiar as I watch her stories on instagram!). We talked about the odd naming practices both our parents had used and after my friend commented on her shoes we talked about shoes too. And of course I got a photo and our books signed! 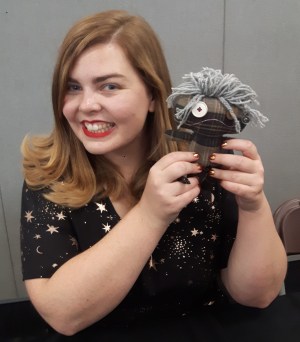 Next we visited Fairyloot and my new found courage quickly failed me so we didn’t stay there long. We floated a bit as we’d got a ticket for the Melissa Sailsbury queue (to get Ms4Tune’s books signed) but we had a 20 minute wait before we could even join the queue, which was roughly the same amount of time until we needed to be in the queue for Alison Goodman so we went for food instead.
We came back and joined Alison’s queue but because she was hosting a Regency dance her sign time was pushed back half an hour. I was feeling a little more confident again so my friend offered to wait in that queue and I joined the wait for Samantha Shannon’s queue. She sat and chatted to some people in the queue but I came back and joined them before too long as I realised that I’d get to meet Alison before I got to meet Samantha. I had a ticket for Samantha though!

Alison was lovely too. She was quite chatty and my friend asked her about the dancing and we had a chat about that (And Ms4Tune’s baby) Again, I got a photo and our books signed. 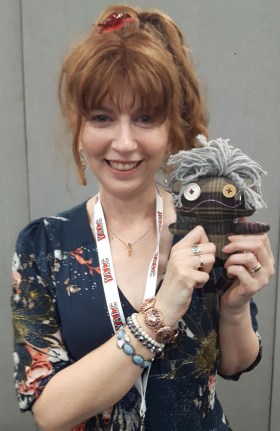 The plan was to visit Samantha Shannon and then go down to the film and comic section and see what was there – my friend was on the hunt for a specific stall and she’d been really patient with me all day. The queue for Samantha was actually quite short by then and we were able to join with our tickets. Samantha seemed far quieter and more shy than the others which is no problem at all, but it meant I had nothing to work with and was equally quiet, luckily my friend commented on the stamps she had and took the pressure off. I got to choose the colour sharpie she used and I chose purple because I like it, but now I wish I’d asked for blue in The Bone Season and red in The Mime Order because that would have been fantastic! I’m also slightly concerned I came across as rude, sorry Samantha! And of course I got (blury) a picture. 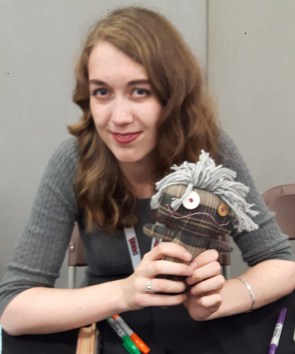 Then we went downstairs and found Tee Turtle and some fudge and no marbles and so we left and spent twice as long getting home as we took getting there!

I really don’t think I got as much out of the experience as I could have, but I really hadn’t done my research. From what I’ve seen online it seems that Saturday is a better day to go if you want involvement and while I’m not sure I do exactly, watching would have at least been interesting. I’m not a massive social media follower either and I think that also impacted what I could have gotten out of my time there. But I considered this mostly a recon mission and next year – I hope to go next year- I hope to get more out of it and maybe go for more or different days (depending on the dates!)
I also feel bad about how awkward I was so I plan to say more next time and research what’s going on a lot more too.