It’s that time of the year again, the time of year when we get to buy books we don’t need and probably wont read, all in the name of charity.
Yes! we’re talking about the NSPCC Book Fair at Holmwood House School!
The end of October is here and it brings more than spooks.
This is our sixth year attending this event, but did we get anything?!
(Spoiler alert: Of course we did!) 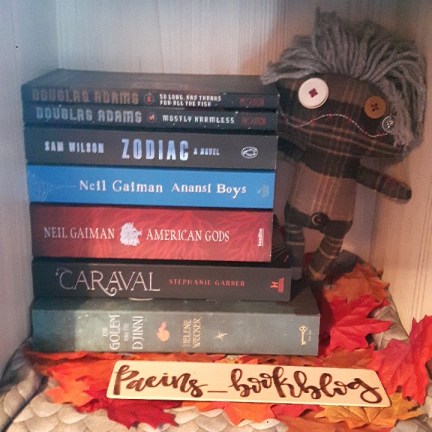 Ms4Tune found these for me, they match the books I got yesterday! So pleased to have a complete set! Move over omnibus.

I haven’t read any of Neil Gaiman’s books yet and I found Anansi Boys and it sounded interesting and looked good. I also picked up American Gods, mostly because it matched, even though Ms4Tune said it requires a lot of concentration. It was lucky I did, because they are a set! American Gods is set before Anansi Boys. They can be stand-alones but they share a character…

The Golem and the Djinni by Helene Wecker

Ms4Tune found this one for me too! She got a copy from the very same fair some years ago, but hers was hardback.

Yes, I know I have it already, I have 2 copies even! But firstly this is a paperback, secondly it’s a very pretty ARC!

Separated by zodiac type? A murderer killing across signs?! This sounds intruding! Also an ARC this was the last one I picked up. There are always a lot of ARCs at the fair, one of their donators is clearly a reviewer! 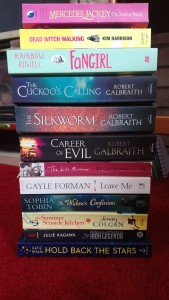 The Sleeping Beauty by Mercedes Lackey

Mercedes Lackey is one of Paein’s favourite authors and yet I’ve never read anything by her. This one sounded like a really funny version of snow white so I thought I’d give it a go.

I know of Kim Harrison but i haven’t read anything by her. This one sounded great though.

Paein read this a while back and said it was really good so when she saw a copy, she grabbed it for me. £1 well spent.

The Cuckoo’s Calling, The Silk Worm and Career of Evil by Robert Galbraith

I have a copy of book 2 already but as I didn’t have The Cuckoo’s Calling I’ve never read it. When I saw the set I thought I may as well get them all matching. I’ll be donating my hardback version back to charity. I want to read the books before I watch the BBC’s TV series.

The Kite Runner by Khaled Hosseini

Leave Me by Gayle Forman

This was an ARC copy that someone donated. I couldn’t resist.

The Widow’s Confession by Sophia Tobin

The cover for this was absolutely beautiful and it sounded pretty good too. Lets hope it’s as good as it sounds.

I love this series! I didn’t even know there was a new book out! This ones all about Flora and her adventures in the city.

The Iron Legends by Julie Kagawa

Apparently this is a collection of short stories based around the Iron Fey novels. I need to reread this series sometime soon.

Hold Back The Stars by Katie Khan

I’ve never heard of this one before but it sounded amazing. It’s also an ARC copy… I’ll let you know if it’s any good..

And for Cassie I got… 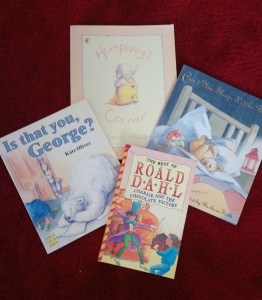 Is That You, George? by Kate Oliver

Which we’ve already read! It’s so cute. All about a boy turning into a polar bear and the day he had as a polar bear.

This little elephant is adorable. This is the second humphrey book I have for her.

Charlie and the Chocolate Factory by Roald Dahl

Who doesn’t want this book for their kids?

I absolutely loved this story as a child and can’t wait to read it to her.