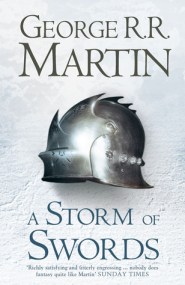 Of the five contenders for power, one is dead, another in disfavor, and still the wars rage as violently as ever, as alliances are made and broken. Joffrey, of House Lannister, sits on the Iron Throne, the uneasy ruler of the land of the Seven Kingdoms. His most bitter rival, Lord Stannis, stands defeated and disgraced, the victim of the jealous sorceress who holds him in her evil thrall. But young Robb, of House Stark, still rules the North from the fortress of Riverrun. Robb plots against his despised Lannister enemies, even as they hold his sister hostage at King’s Landing, the seat of the Iron Throne. Meanwhile, making her way across a blood-drenched continent is the exiled queen, Daenerys, mistress of the only three dragons still left in the world. . . .

But as opposing forces maneuver for the final titanic showdown, an army of barbaric wildlings arrives from the outermost line of civilization. In their vanguard is a horde of mythical Others–a supernatural army of the living dead whose animated corpses are unstoppable. As the future of the land hangs in the balance, no one will rest until the Seven Kingdoms have exploded in a veritable storm of swords. . . .

At this point how much is spoiler? It’s a fine line to tread! I think these are safe:
I’m so pleased Ghost is back! And woah, go Sam Tarly! And, uh, Lady Stoneheart I presume?!

I’ve thoroughly enjoyed this book! This has been my favourite so far! All the best bits seem to have been in this book. Not surprising because it took forever to listen to, it’s so long! So long the physical copy was split in two! I kept up with the first half quite well but I just didn’t get to flagging anything in part two…I still need to do that!

At the end of this book there was something rather major happening and I think that’s the first major plot point the show didn’t pick up. Also another is slightly different so things are going to start getting different from here out.
I’ve also heard that the writing style varies greatly in the next books which makes me a little apprehensive, but we’ll see how it goes!
I’m looking forward to the continuation of most stories, though I find myself not actually that bothered about Dany, much to my surprise – being a past favourite. Perhaps, because it’s not looping back in (yet)? She’s so much removed from the others that it’s a little Meh.

Apparently I’ll have more points of view to look forward to from now on which could get terribly confusing, I’m already forgetting people. I don’t know who the guy was in the epilogue, luckily he was thinking about his family connections so I worked it out! (I think that was on purpose, I think he was only mentioned by name previously, if at all)

This was LONG. Every time I got to a new chapter I was surprised with where we were, I kept thinking “Oh, we’re only there.” SO FAR TO GO! And yet, the show is far passed the books now, so really not that much further to go at all. I’ve been switching it down to listen at normal speed with this one, I found it harder to concentrate on some of the pieces with it at 1.25 – the choosing of the next commander for example, and I haven’t switched it back.

Some characters I’m hating more than I do in the show. They’re quite unreasonable and probably mad too. Others seems to be noticing too so that’s nice. They also seem to think that their assessment of their own abilities are far higher than they are – which is a relief to be honest. Crazy is easier to deal with than crafty. Though crafty is probably more easy to predict…?

I’d forgotten that someone rose to someone’s rescue! Possibly because at the same time something else happened, something sad. I didn’t want it to happen but at the same time I was focused on it coming and it was well done in the show. What’s crazy is how young half the characters are! I keep forgetting and then it comes up again! Jon is what, 15 now? Sansa 13, Arya 11? They’re going on, doing epic things, then suddenly they say “But I’m only (Age here).” and you’re left thinking woah!

I always forget where we were at the start of the books so I can’t really talk of developments so much. I’ll try and see if I can manage it in the next one….