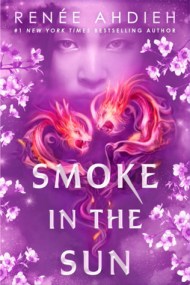 Thank you to Netgalley and the Publisher for the chance to read this book in exchange for an honest review.
Publish Date: 7th June 2018

The highly anticipated sequel to Flame in the Mist - an addictive, sumptuous finale that will leave readers breathless from the bestselling author of The Wrath and the Dawn

After Okami is captured in the Jukai forest, Mariko has no choice – to rescue him, she must return to Inako and face the dangers that have been waiting for her in the Heian Castle. She tricks her brother, Kenshin, and betrothed, Raiden, into thinking she was being held by the Black Clan against her will, playing the part of the dutiful bride-to-be to infiltrate the emperor’s ranks and uncover the truth behind the betrayal that almost left her dead.

With the wedding plans already underway, Mariko pretends to be consumed with her upcoming nuptials, all the while using her royal standing to peel back the layers of lies and deception surrounding the imperial court. But each secret she unfurls gives way to the next, ensnaring Mariko and Okami in a political scheme that threatens their honour, their love and very the safety of the empire.

I actually finished this sequel to Flame in the Mist on the 7th of June, but I wanted to have some time to think about the review I was going to write, because apparently I’ve forgotten how to write them again, so we’ll see how this goes.

I really enjoyed reading this book, I generally was so excited even while reading it.
There was a lot of things that seemed to be setting up foreshadowing but sadly they were red herrings – that would have been a fantastic event had it happened.
I did spend a lot of the book wondering who would be left at the end and while the ending wasn’t what I first expected, it certainly was good.
There was a whole element to this story that I wasn’t expecting and while I’d have liked some more information on this whole thing – as it apparently affected at least 4 people – I don’t think I was too confused with how little we were told.

Surprisingly though, I feel like there were a lot of lose ends left – which I don’t remember being the case with TWATD. There are many more characters involved in this story though so perhaps that’s it.
Some of my most pressing – and hopefully vague enough – questions are: What about Kenshin etc? Yumi? Her brother? The new Emperor?!
Cause things are a little different now….a more rounded epilogue may have been nice.
Will these guys be getting novellas? Please!

Also surprising was my shift of feelings about a certain character or two. One makes more sense than the other, they are one of the many characters that grew and changed into better people. The other one seemed so intent on fighting alone though, there were other ways for them to reach their goal, especially later, but they just kept forging ahead.

Another great duology from Renée Ahdieh and I most definitely recommend it, as well as it’s predecessor The Wrarth and the Dawn!
I think that Renée has hit the sweet spot with duologys containing partnerships-not-love triangles and I am looking forward to the next one.