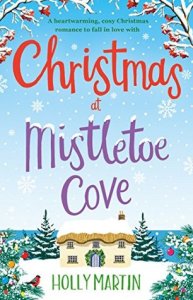 Growing up on Hope Island, Eden Lancaster always believed that if you wished hard enough for something, dreams really could come true. But Eden’s greatest wish is also her biggest secret: she has been completely in love with her childhood friend, the charming and attractive Dougie Harrison, for as long as she can remember. And he has no idea.

When Dougie leaves his successful life in New York to return home to Hope Island for good, Eden can’t escape her feelings. Her heart is full of hope that her romantic dreams are finally, at long last, going to come true…

This Christmas could change everything. But can a lifelong friendship really turn into the perfect romance? And will Eden get the happily ever after she’s always wished for?

Uh…ok. wow. What?
I loved the idea of this book – two people, secretly long in love with each other, finally getting on track. This execution of it however? Slightly weird…
Also the writing, erm…I don’t want to say it was terrible, but oh boy, we didn’t get on. “She smirked at his charm and manners.” What?!
I felt quite Fanfic-y by which I mean too fast paced, quite bland and minimal character development, they were quite 2D (I know they’re not all like that, but a good quantity are). Many of the characters had private conversations in public places which was weird – especially in a small community cause you know everyone and everyone knows you. And now they know whatever you’re not saving for at home… They also seemed to like oversharing in great long speeches too which I found quite distracting.
So why did I keep reading? As I said, I loved the idea of this book and I was gonna see them happy dang-it! Also, even dodgy fanfics have a mood.

Eden and Dougie were interesting characters and I’m sad they were never fully fleshed out. It was all written from a stereotypical point too, though there were at least two things added to try and make this not seem so. What really made it all so weird were the silly bits, which I think were added for a laugh but really they were just silly.
I’m not sure any part of Dougie’s plan was actually a good idea – except moving back home, that was a fantastic idea!

And did I mention everything moved too fast? 12 years be damned. It would have been nice to see more interaction between them. Even after! It was all over the top and I really want to know if it mellowed.

What’s truly sad is that the book started off really well. I remember liking the some of the setup and character introduction. It just quickly got out of hand.
I’m not interested in reading any more books in this series or by this author for now, even though I liked this island world and the glitter on the cover. It was a quick, sweet read but I do like them to have a little more welly and substance.