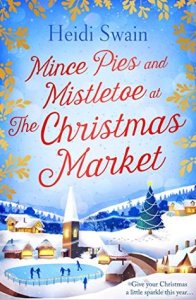 “The couple, Tanya and Mike, who own the hotel up the road from your dream beach…”
“Yes, I remember.”
“They’re going to be looking for more staff in the New Year and I’ve put your name forward.”
-Page 296

Christmas has arrived in the town of Wynbridge and it promises mince pies, mistletoe and a whole host of seasonal joy.
Ruby has finished with university and is heading home for the holidays to save up for her trip around the world in January. Against her father’s wishes, she takes on a stall at the local market, and sets about making it the best Christmas market stall ever. There’ll be bunting and mistletoe and maybe even a bit of mulled wine.
But with a new retail park just opened on their doorstep, the market is under threat. So together with all the other stallholders, Ruby devises a plan to make sure that Wynbridge is the first port of call for everyone’s Christmas shopping needs.
The only thing standing in her way is Ruby’s ex, Steve. It’s pretty hard to concentrate on saving the world when he works on the stall opposite, especially when she realises that her feelings for him are still there…
This Christmas make time for some winter sparkle – and see who might be under the mistletoe this year…

Uh. Ok. So, here’s the situation. I read what is sort of 5/7 and really liked it, I owned 7/7 and then realised that it was sort of a series so then I bought all the others. I read what I thought was 1/7 but was actually 2/7 and I wasn’t quite as enamoured as with 5/7. So instead of trying to read the rest in order I decided to go just for the Christmas ones for now. This is 3/7 and it’s more like 2/7 than 5/7 – so I’m assuming that Heidi Swain’s writing improves? Here’s hoping because 7/7 is up next! Are you confused yet?

The couple in this book are mentioned in the first one I read (number 5) so it was interesting to see their story.
It was a little weird. The book didn’t focus heavily on their romance at all. It was more of a background feature, which was quite nice. That’s not what was weird though, what was weird was the proper storyline and Ruby’s father. Also, some of Ruby’s inner monologue.

Steve wasn’t my favourite. Maybe because Ruby already knew him so we didn’t get an introduction to all things Steve. Also, as the dumper, I started off disliking him before he even appeared on the page in anything other than thought or talk.
He was a nice chap however and Ruby likes him so what can you do?

Ruby was a little stubborn and sort of seemed to have a head-in-the-sand kind of attitude, but thinking about it, her plan is to work the stall until it’s time to jet off, so she’s going to be purposefully head-in-the-sand-ish in an attempt to not get involved in the local drama. Luckily she fails somewhat!

The weirdest thing, which is also possibly the most annoying thing, was how changeable people were. Well, mostly 4 people. You could say like father like child.

A big part of why I’m still reading these books (Because yes, I will be reading 7/7) is because they’re so freaking British and I’m loving it! I didn’t realise that so many books I read were American, or at least written in American and this is just so refreshing. I think that I will save the other…three for the summer though, especially as they seem to be summer reads.

I also don’t think that these are book I will read more than once. But who can say? I’ll possibly hold on to them until my next bookcase purge though – or until I’ve read all the one’s I own.