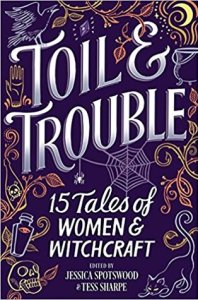 “This is what witchcraft looks like: it is women holding hands, harnessing power and changing their fate.”
-Page 402

Are you a good witch or a bad witch?

A bruja’s traditional love spell has unexpected results. A witch’s healing hands begin to take life instead of giving it when she ignores her attraction to a fellow witch. In a terrifying future, women are captured by a cabal of men crying witchcraft and the one true witch among them must fight to free them all. In a desolate past, three orphaned sisters prophesize for a murderous king. Somewhere in the present, a teen girl just wants to kiss a boy without causing a hurricane.

From good witches to bad witches, to witches who are a bit of both, this is an anthology of diverse witchy tales from a collection of diverse, feminist authors. The collective strength of women working together—magically or mundanely–has long frightened society, to the point that women’s rights are challenged, legislated against, and denied all over the world. Toil & Trouble delves deep into the truly diverse mythology of witchcraft from many cultures and feminist points of view, to create modern and unique tales of witchery that have yet to be explored.

I feel deceived! I don’t think this book was half what I was hoping it would be!

I shall only be talking about my favourites of these stories, or the ones that got to me.

I Thought this story was adorable. What was not adorable, however, was the way it freaking ended! On a cliffhanger!! And it’s not part of a series I can go read! I wanted to see them meet. I wanted to see how they worked out their differences. I wanted more than the puny TWENTY ONE pages we get.
I also want to paint….

This is set in America in 1650 and it’s one of those stories that might just be true and it makes me really angry! The systematic way that shutting up women was gone about is just mind boggling.
And teaching people the Devil resides in the wilderness probably explains why a lot of the problems we’re currently having have happened…
What would have made this story superb would be one of those left, finding themselves in need of a midwife or healer….

Death in the Sawtooths by Lindsay Smith

This one was set in a really interesting world. I’d love to know more but at the same time the sort of conflict going on would make me uncomfortable. Conflict in general makes me uncomfortable, not this particular kind. It’s sad what heppened before this story and IN this story, but I like Mattie. The story indicates she’s had some development and I like her attitude about her calling. I also loved that “The Lady had no use for a life that hadn’t been lived in full.”

The Legend of Stone Mary by Robin Talley

This was a sad story but I liked how it turned out. It had a nice little twist or two at the end there but it ended peacefully.

The Well Witch by Kate Hart

I think I liked this one, but it was also a little weird. And another cliffhanger! Gah. I’d like to read more about two of these characters.

The Gherin Girls by Emery Lord

I liked this one too! It’s an interesting family and I like the three sisters. Their dynamic was a little surprising but then I don’t have sisters so I don’t know. It’s a little rocky, due to past happenings but it solidifys at the end. It was also quite powerful. I almost used a quote from this one!

Why They Watch Us Burn by Elizabeth May

This was an interesting story. It was a mix of old and new and it’s quite relevant especially now. Especially with the Me Too and Times Up movement. And the mistaken belief that now is “a hard time to be a guy.” or whatever. This is a possible outcome. Extreme? Sure. But then it was last time.
This is also a pretty powerful story and might even be the best one of them all. While many of the others are cute or sweet or nice to read or even frustrating, this one reminds us we need to build each other up and not let them continue to teach us to tear each other down

I was heavily disappointed in this book, but having run back through the stories to write this post, there were more I liked than I remembered. I was certain I was going to donate this book, but the last two stories in particular are perhaps two I’d like to read again some time.
Which probably explains why I originally gave it 3 Voodoos – that did confuse me.