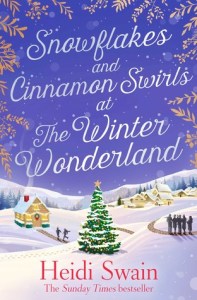 “I had no idea that sometimes angels needed us every bit as much as we needed them.”
- Page 389

After calling off her engagement, Hayley, the Wynthorpe Hall housekeeper, wants nothing more than to return to her no-strings fun-loving self, avoiding any chance of future heartbreak. Little does she know, Wynbridge’s latest arrival is about to throw her plan entirely off course . . .

Moving into Wynthorpe Hall to escape the town’s gossip, Hayley finds herself immersed in the eccentric Connelly family’s festive activities as they plan to host their first ever Winter Wonderland. But Hayley isn’t the only new resident at the hall. Gabe, a friend of the Connelly’s son Jamie, has also taken up residence, moving into Gatekeeper’s Cottage, and he quickly makes an impression on Wynbridge’s reformed good-girl.

As preparations commence for the biggest event of the season, the pair find themselves drawn ever closer to one another, but unbeknownst to Hayley, Gabe too has a reason for turning his back on love, one that seems intent on keeping them apart.

Under the starry winter skies, will Gabe convince Hayley to open her heart again once more? And in doing so, will he convince himself?

I am sad to report that it seems Molly will not be getting her own book. She seems quite happy in this one. However, on the plus side we see a lot more of her and that’s the best news!

I’ve been jumping about with this series, and I’ve read two earlier ones and two later ones. Through this unintentional cross sample I can confirm that Heidi Swain’s writing is improving as she goes along! So if you’ve tried one of her earlier books, why not give another, newer one a go? The later two I read had a far better flow.
It’s not my favourite writing – but I will be definaltely be keeping an eye out for her books in the future, because they’re so brilliantly British, which I keep saying. But they’ve made me feel the lack and I’d like to introduce some British back into my fiction, thank you very much.

I’m a little sad we didn’t get to see more of the ‘New Hayley’ – we met her Last Christmas in Sleigh Rides and Silver Bells at the Christmas Fair which was apparently the ‘Old Hayley’ – and at the start of this book she decides she needs to be the ‘Old Hayley’ again. I’m guessing she ends up balanced between the two, but that is a little confusing as we’re in her head, we’re … just with Hayley, new, old, whatever.
I also think that we didn’t quite get as much of Gabe as we could have – but that might have given his game away.
He sounded LOVELY though. All muscly and kind and woodsy.

It was nice to see how Anna and Jamie were getting on with their activities and as it seems Molly won’t be getting a book, I guess this is the last time we’ll be checking in on Wynthorpe Hall.
Although… they do have BIG plans and big grounds so here’s hoping we get to visit again!

I did find it odd that Hayleys big news was kind of swept away. I mean, good logic – but she should have had some idea, questions would have been asked, of everyone possibly involved… so, hmmm. It also felt a little thrown in, because it had been previously mentioned and needed to be covered.
I can’t decide if a reconciliation is something I’d have liked to have seen. Firstly because – embarrassment – but also because – awkward. I mean, it would have had to have not ever been a thing to anyone? Ahh, It’s really hard to be vague and talk about this!
It also felt the other big thing was talked about quite vaguely. But perhaps there isn’t much to say about it?

The other books I’ve got from this world I will read when it’s more summery outside as they seem to be the summer books. And as I said, I am interested in more books by this writer in the future.