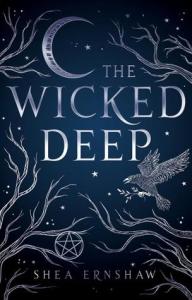 “But magic was not always so linear. It was born from odium. From love. From revenge.”

Welcome to the cursed town of Sparrow…

Where, two centuries ago, three sisters were sentenced to death for witchery. Stones were tied to their ankles and they were drowned in the deep waters surrounding the town.

Now, for a brief time each summer, the sisters return, stealing the bodies of three weak-hearted girls so that they may seek their revenge, luring boys into the harbour and pulling them under.

Like many locals, seventeen-year-old Penny Talbot has accepted the fate of the town. But this year, on the eve of the sisters’ return, a boy named Bo Carter arrives; unaware of the danger he has just stumbled into.

Mistrust and lies spread quickly through the salty, rain-soaked streets. The townspeople turn against one another. Penny and Bo suspect each other of hiding secrets. And death comes swiftly to those who cannot resist the call of the sisters.

But only Penny sees what others cannot. And she will be forced to choose: save Bo, or save herself.

Um, ok. Where to begin?
Honestly, I don’t feel sorry for this town. The boys I do but not the town. I mean it’s not like the sisters were targeting specific family lines or boys that were horrid, it was just boys. They didn’t deserve to die – but then neither did the sisters. Nor did any of the other girls drowned in an attempt to stop it either!
I assume the sisters got some of the bloodlines – I mean….I would! And I’m surprised offerings weren’t made, but then this IS 200 years later, I assume everything was tried early on, but that wasn’t actually mentioned I don’t think so I could be wrong.

I really liked the sound of Lumiere Island, it sounded really peaceful there – even if you can only get to it by boat! A half moon island with a lighthouse, a farm house, two cottages and a fruit orchard – there was perhaps more there but these were they key areas.
I liked this world. It was well written and flowed nicely – though it felt like nothing was going to happen for a good part of the book which seemed silly – because otherwise what was the point of the book? But it all seemed calm and safe.
But boy did Bo take a beating! I liked him – except for his idea of killing three innocent girls. That’s what got you into this mess Bo! He still feels mysterious at the end so we don’t find out too much about him, but really it’s only set over roughly 3 or 4 weeks.

As to the ending – I think it could have been explored more, at least for me.
What happened is obvious and well written, but the WHY is really something I often need, to understand the subtitles of some behaviours, or at least it’s something I like to have so that I know I’ve understood correctly. Of course we weren’t offered these particular why’s as they weren’t Penny’s and this is a first person book.

I received this book in a book box and though it has an amazing cover I don’t think I’d have chosen it myself – I’m really not a fan of how wise women were treated nor of the way men blamed their short comings on women and got them killed because they wouldn’t have sex with them, OR the way women blamed each other rather than said men, so I tend to avoid books with witches and women being killed because I don’t like to be angry at books.
However this book wasn’t that bad and I actually quite liked reading it – the ending kind of blew my mind a little though, and as I wasn’t sure how I felt about it I couldn’t give it more than the rating I have.