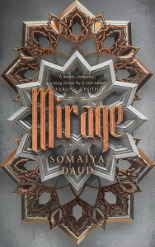 Thank you to Netgalley and the Publisher for the chance to read this book in exchange for an honest review.
Publish Date: 28th August 2018

The crown of Dihya had been stripped from me, my face changed, my body broken.
But I was not a slave and I was not a spare.
I was my mother’s daughter, and I would survive and endure. I would find my way back home.

In a star system dominated by the brutal Vathek empire, eighteen-year-old Amani is a dreamer. She dreams of what life was like before the occupation and receiving a sign that one day, she, too, will have adventures, and travel beyond her isolated moon.

But when adventure comes for Amani, it is not what she expects. She is kidnapped by the government and taken in secret to the royal palace. There, she discovers that she is nearly identical to the cruel half-Vathek Princess Maram. The princess is so hated by her conquered people that she requires a body double to appear in public, ready to die in her place.

As Amani is forced into her new role, she can’t help but enjoy the palace’s beauty – and her time with the princess’ fiancé, Idris. But the glitter of the royal court belies a world of violence and fear, and she soon realises that one wrong move could lead to her death…

I started this book quite some time ago but just…stopped. It wasn’t that the book wasn’t interesting and more that I had lost interest in digital-books and this was too gentle to keep me going on that platform. I received a copy in the September Fairyloot box, but it still took me FIVE months to read it!

I didn’t need to re-read the first 40 pages I’d already read though, which surprised me. I easily remembered what had happened! Not the names though – I never remember characters names…actually sometimes I’m sketchy on peoples names too, but shh.
The first part of the blurb – or the tagline or whatever – really confused me though, turns out she’s not a princess. This means something different, so pay attention!:
“The crown of Dihya had been stripped from me, my face changed, my body broken.
But I was not a slave and I was not a spare.
I was my mother’s daughter, and I would survive and endure. I would find my way back home.”

I thought that he story was well paced. When I finally picked it up again I read it in 2 days. It wasn’t terribly gripping – I’d put it down and go away quite happily, however I kept coming back because I just had to know what happened next!
I wasn’t reluctant to read it exactly, just maybe in a little slump. I don’t think the story was in any way too complex either, but I think I struggled with the world a little – most likely because of the mix of alien invasion tech and village life, horses and blasters and so on. It was a little weird.

I loved the culture of this world that we glimpsed and as this is a trilogy I’m terribly excited about learning more about the Andolaans history as well as more about Massina and how her story ties in.
I really liked who Amani, Idris and Maram were, or became or seem to be and I Have high hopes for them all. I think a lot of it’s resting on Amani to be fair, but she can do it.

I would call this a soft book. Nothing too anxiety inducing happened – which was frankly a relief after my high anxiety last read!. That’s not to say this book was dull, I was only ‘bored’ when they were traveling from one place to another. I didn’t really care, I was impatient for them to get to where they were going so I could meet the people.

I did feel like the romance was a little insta-love. It started as just attraction I think, which was good and though they had three full weeks together as themselves, we saw hardly any of that. It might have helped to alleviate some of the insta-love if we’d spent some more time with them in those early stages. It only seemed to me that they’d met somewhere between five and eight times.

This was quite a short book and some fleshing out would really have helped, both with my world confusion and the insta-love feeling. Some more history dotted about would have been great and definitely more time in those three weeks with Amani and Idris!
But maybe those things were vague on purpose and we need to read the next two books to find out?!

I’d have liked this to be a duology rather than a trilogy – mainly because then I wouldn’t have to wait so long to find out how this ends…
But I think this was a great start to a series. I hope book two will deliver us a bang that book three will wrap up nicely!

Also, I want Maram to have to stay with Amani in some bizarre twist.
And, I want Idris to grow a beard.