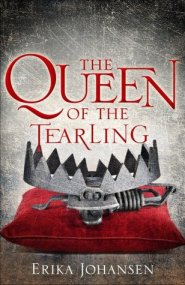 “Tear Queen, you’ll either be dead within a week or you’ll be the most fearsome ruler this kingdom has ever known. I see no middle ground.” – page 90

On her 19th birthday, the soldiers come for Kelsea. Almost against her will they take her away from the only parents that she has ever known to return her to the place of her birth, where she will inherit what is hers; a kingdom on its knees – corrupt and full of horror. Because her foster parents have been her teachers and they’ve been raising her to do a difficult thing; not follow in her vein and stupid mothers footsteps and to learn from the mistakes they had promised to never tell Kelsea about, because she is the sole heir to the throne of the Tearling. The kingdom has been ruled since her mother’s death by her uncle, the Regent, a puppet of the tyrant sorceress The Red Queen, ruler of the kingdom next door.
The soldiers at her door are the Queens Guard, each vowed to the queen, they will protect her with their lives. Most of them served her mother, but they also will not speak of the past queen, their vows forbid it. Many sources want Kelsea dead and simply getting to her Keep will be task enough, let alone putting right the problems her mother left behind, ones that Kelsea must learn of as she travels. Not only does she need to guard her life from those outside her kingdom but from those within it as well, all while trying to win over the people her mother turned against the throne…

I read this after Paein, so she’d already gone through the whole “WHEN IS THIS SET??!” agony and previously explained that to me, so going in I knew this was set in the future, after some form of environmental disaster geographically changed the world. Deciding that technology took some of the blame, groups of people had set out across an unknown sea to start again, resulting in Tearling and its surrounding countries. To be honest though, I don’t think this is something that would have bothered me too much during the reading, considering I read it within 24 hours. Had I not known, the slow reveal would have been something I would have amazed over I’m sure (and we still don’t know it all! But then neither does Kelsea. Yet). And I really want to know where the magic came from!
I must admit to finding this book the perfect pace for this kind of story. I didn’t find any part of it dragging and I felt all the information we were given was relevant. But then sometimes I like good things to be set out slowly. So much more satisfying. And as I said I read it particularly quickly.

This book seems to have garnered a lot of negative reviews, which I admit to having a quick look at before writing this, and though a lot of them angered me as it seemed they had been written by people with little to no patience, or concept of the difference between basic words, I don’t want to dedicate my review to addressing these people. (I also regret reading them because they’ve crushed my awe bubble a little. Never let the masses bring you down)

Basically I enjoyed watching Kelsea start to create herself into this Queen we get glimpses of. She’s pretty much been thrown in the deep end with a bunch of people who don’t think much of her or even expect her to last the week. She copes remarkably well with suddenly meeting so many new people, but she’s had her whole life to prepare and she had a well-grounded upbringing and she’s not an overly shy person. She has yet to learn all she needs of politics but her morals steer her well and she’s unapologetically herself.  She finds herself plain and has much contempt for vanity, mostly stemming from what she knows of her mother’s behaviour and the excess she sees around her, I feel. I have a weakness for good books in which epic people are formed.

The main thing I love about this book is the little excerpts from books within the storylines future about Queen Kelsea, her reign or things she did at the start of each chapter. FORESHADOWING! I shamelessly love a good foreshadowing. There are also parts within the story like this:

“Later, Tyler would realise that his decision was made then, that there was never any other path for him.” – page 321

As a hobby writer, the depth and breadth of the world development Erika Johansen must have in order to write bits in like that simply astounds me. (And I’m totally jealous, let’s be honest.)

While the book doesn’t end on a cliff hanger (Thank you!) there are plenty of mysteries left unsolved. Unfortunately as this recently was published, book two doesn’t even have a name yet. Ah, but there is the promise of a film with Emma Watson as the lead. I have no doubt that her portrayal will be anything but a success. (But who will play Mace?! I vote Paul Bettany!!!)

The one main question that seems to be steadily gaining momentum as the most important is this;