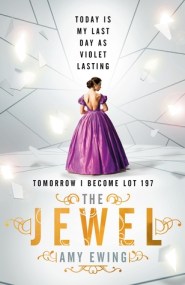 “I have given you freedom!”
“Walking around the palace without an escort is not freedom!” – page 285

When she was young, Violet tested positive for being a Surrogate. Raised in a holding facility until she was ready, she was then sent to the auction and sold for six million diamantes. Now the surrogate for the Duchess of the House of the Lake and living within her house in the section of the Lone City known as the Jewel, her remaining purpose in life is to produce a healthy and extraordinary child for this awful woman.
No longer in possession of her name or even her own body, she fights to hold onto her identity when everyone around her is determined to look through her. Everyone that is, except for Ash.

Honestly, it started out as quite a promising dystopian story but then it started to flag and I thought I knew what would happen and I wasn’t happy (At which point, I peeked at the end. I can never seem to follow my own advice and NOT DO THIS!!!) as there were threats of a love triangle attempting to form but  then I got to the end properly AND I WHAT TO KNOW WHAT HAPPENS NEXT!!! It’s a little reminiscent of The Hunger Games but certainly not on the same scale.

This is an odd world indeed, but I’m certainly curious as to how the surrogacy situation is resolved. I’m not sure I’d have wanted to read more had this book not finished the way it did, but now I’m desperate!! haha

3 comments on “Review: The Jewel”