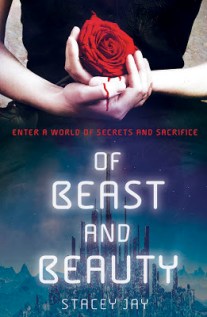 “They were celebrated and named Beauty and Beast, but none of the king or queen’s people would ever say which star was which.” – page 389

Born into a life leading to sacrifice – hers – Isra, the blind princess of the domed city of Yuan almost lived her life doing as she was bade by her father. Blinded as a child she is locked in a tower to keep her safe and away from the eyes of the public. Except she escapes nightly to roam the rose gardens. It is here she meets Gem, Monsterous to her Smooth Skin, he is desperate to save the lives of his dying people. Cast from the domed cities they live out in the wilderness where food is scares and convinced the enchanted roses are the key he stays with her as her slave as he tries to find out the secret. But Isra wants to help his people too as well as the Banished within the dome, those that are despised for having Monstrous traits. As their friendship grows however, Isra’s eyesight is not the only thing that is recovered.

Ok, this review might get close to revealing vague SPOILERS! You have been warned.

I loved this retelling of Beauty and the Beast! I loved how it was on an alien planet and all the echoes of what’s happening here happening there. And I also love the switch around at the end! There, wanna read it now? haha

This version seemed to have more story behind it than many other’s I’ve read. It wasn’t all about the romance, though that was of course the key. There was more happening around them and it was at once olde worlde and futuristic. I could even see something like this happening.

The shifting points of view were annoying only when they shifted in the middle of an event off somewhere else, but they were helpful in letting us know what was happening. I think there were 3 in total.
I certainly intend reading other books by this author.