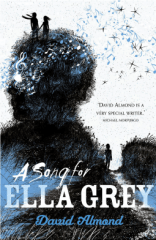 ‘He played, and it felt as if we were filled with life as we listened, and as if we almost died.’ Loc 345

A lyrical teenage love story inspired by the myth of Orpheus and Eurydice. Set in the urban landscape and coastal headlands of the North East of England, David Almond brings his legendary storytelling to this heart-breaking tale, giving it the intoxicating urgency and absolute beauty he is so admired for.

“I’m the one who’s left behind. I’m the one to tell the tale. I knew them both… knew how they lived and how they died.”

Claire is Ella Grey’s best friend. She’s there when the whirlwind arrives on the scene: catapulted into a North East landscape of gutted shipyards; of high arched bridges and ancient collapsed mines. She witnesses a love so dramatic it is as if her best friend has been captured and taken from her. But the loss of her friend to the arms of Orpheus is nothing compared to the loss she feels when Ella is taken from the world. This is her story – as she bears witness to a love so complete; so sure, that not even death can prove final.

When I was younger I read both Kit’s Wilderness and Skellig. The writing was beautiful and lyrical and set a wonderfully mysterious air to each of the stories. I loved David Almonds writing and so I was very excited to see how he would embellish the greek myth of Orpheus and Persephone. Sadly I found A Song for Ella Grey to be unengaging and disjointed.

The problem for me was that the story was told from the best friends point of view rather than the two lovers Orpheus and Ella. This could have worked if there had been more personality and opinion from the main character, Claire. The story spent a lot of the time describing minute details, such as colours, shapes and sounds, things that created beautiful imagery but very little connection to the story and the characters. What we ended up with was a very emotionless account of what lead up to the death of Ella Grey. And unfortunately this resulted in me not enjoying the rather awkward sexual encounters, not really understanding the relationships between any of the characters and eventually not caring about the outcome of the story.

I hate being so negative, as David Almond has such a beautiful writing style, but for me, this one just didn’t work.

Note: a copy was provided courtesy of Hodder Children’s Books, through Netgalley, in exchange for an honest review. No compensation was given or taken during this process.