This one actually isn’t from pinterest, though I have several to try, this one is actually from youtube.

Not only does she show you how she makes this deodorant and how to change the quantities depending on what you want out of the deodorant but she talks about changing your diet to change your body odour and improve your health. I recommend watching this video as she has some interesting facts and some tips on keeping body odour down. I switched from using conventional deodorant to using straight up coconut oil last spring/summer. I worried for a while that I smelt but I think it was just the scent of the coconut oil on my skin. While there was nothing wrong with that, I thought I’d try this as it includes bicarbonate of soda.

This deodorant combines bicarbonate of soda (baking soda) which is an odour neutraliser and coconut oil which is rich in lauric acid, it has antibactiral properties which will help get rid of odour producing bacteria. It’s also an amazing moisturiser for the skin among other things. Here is a link to Holistichabits video on the beauty uses of coconut oil:

What you need to make the deodorant: Mix the powders together in your jar, then add the coconut oil (I melted mine then spooned it in before it was fully set again to make it easier to control) and mix that in too. Add your essential oil if you want, I chose the same as Holistichabits but I also put in some of my Weleda calendula oil too, just for some extra care for the delicate under arm area Then I stuck it in the fridge to set the coconut oil as it was still a little melty. 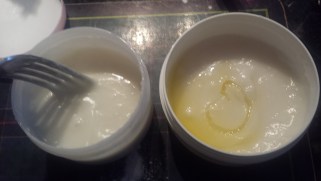 So, I made this on Saturday and once it was complete I used some, as you do (at the end of the day, having spent the day wearing Lush’s T’eo which always seems to have a faint smell of swamp moss, as does their powdered The Guv’ner)…The next day I happened to spend sweating out a fever so the day after that, when I was drenched in sweat, did I smell too? no. My armpits where as fresh as soggy daisies (sorry for that imagery) It’s safe to say I’m impressed!