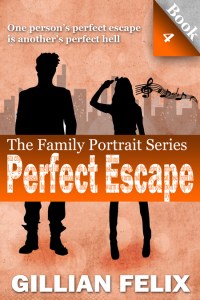 Thank you to Gillian Felix (the author) for a chance to read this book in exchange for an honest review.

In this coming-of-age story, teen singing sensation Leighann DaCosta tries to find out who she is without her music career. A career that has been part of her life since before the age of ten. When Leighann’s estranged father enters her life, she is caught up in a tug-of-war between both parents. Does she trust the man who abandoned her as a baby, or a mother who is losing her mind?

When heartthrob Zax Banovic is assigned to tutor Leighann, he provides her with the perfect escape from the madness in her life. Enter Kristin Newman, Zax’s super-hot, sickeningly perfect, tennis-pro girlfriend, who dampens any chance Leighann has with him.

After the unthinkable happens, Leighann’s world is shattered, causing her to shut everyone out. Unable to cope, Leighann accepts help from her frenemy, but will the help she accept come with a hefty price?

So I’ve enjoyed this series so far. Its angsty and reminds me of a mash up of Nashville, 902101 and Revenge. It’s gritty and reads like a tv show which is intriguing in itself.

I know, I know so why the low rating. Well I think it’s because the focus of Perfect Escape was Leighann and Zax. I haven’t been a massive fan of either character, I prefer Leighann’s sister L’Wren and her relationship with Kevin and his sister Adrianna, I really enjoyed book 2 because it focused on their stories. I just find Leighann a bit boring in comparison. Too Innocent for my liking. Plus Zax isn’t really interested in her as he has a girlfriend. With Leighann and Zax taking up most of the story I struggled to finish.

I really love Savi as a character (Leighann’s mother) she’s just so mean and twisted and it was because of her that I kept reading. I just wish she’d had more evil moments!

I probably will continue reading this series but only if the focus isn’t on Leighann and Zax. I also found the writing in this one lacked the emotion of the last 2. It seemed a little clinical at times, almost as though it was a report of events.

All in all this installment was lacking that spark that I saw in the last 3. Here’s looking to book 5 for that sparks return because I want more Adrianna & Haze and Kevin & L’Wren!