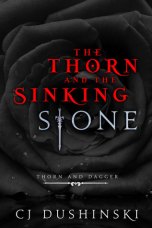 Daggers. Roses. Cowboys. Boat Men. Survivors of Earth’s Last War, four “families” vie to rule the dreary streets of Rain City through violence and blood. Valencia Hara, Princess of the wealthy Black Roses, is raised in warrior ways with sharpened steel. But she is no ordinary Rose. She is Cursed—tainted with the ability to see seconds into the future…

To avenge his father’s death, Sebastian Leold, of the rival gang Two Daggers, must face off against the Black Princess, he with his dagger, she with her katana sword. Yet a secret from a shared past leaves him unable to kill beautiful Valencia; nor can she kill him. For they once knew each other beyond their blood feud…and they have more secrets in common than they know.

But in a world filled with vengeance and violence, there can be no room for love…

Honestly, I mostly picked this book for the black rose, I LIKE black roses… but I’m glad I did. When I read the blurb I thought that the description ” They once knew each other beyond their blood feud” meant that this was also a reincarnation story but no, they simply knew each other as children as I discovered as I neared the end of the book. It does however have a sense of Romeo and Juliet about it. Waring families, those on opposite sides falling in love. However this is set in a dystopian future and holds a paranormal twist – the Cursed.

I found this story slow at first, the intro wasn’t something that grabbed me and it wasn’t until they met – about 18% of the way in – that I began to get captivated. Indeed, I stayed up too late to read it, not something I have the luxury to do very often.

The story is told in first person, from the point of view of both Valencia an Sebastian, it’s not quite alternating as sometimes they have a few chapters each. Both characters are pulled into a war they don’t really want to be in and they really don’t want to kill each other. They were both well developed characters and I really can’t pick a favourite. As they aren’t reincarnated I’m really hoping there’s a second book so that we can learn not only more about the things Valencia saw but also the world they’re in and what it is that draws them together.

Valencia is a strong character, raised to be a warrior she’s done nothing but train to fight and kill and she’s finally old enough to join in the war she’s firey and keen. Sebastian is more of a mellow sort. Somewhat depressed at the start he seems almost her opposite but they soon discover that they have more in common than they thought. A lot was covered in the book and yet I still feel like it was an introduction to the main story. Hopefully there will be more books and that Sebastian’s little assessment at the end wont turn into foreshadowing. I really hope any future books wont fall into the sequel trap!