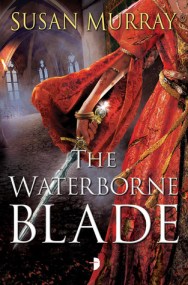 The citadel has long been the stronghold of Highkell. All that is about to change because the traitor, Vasic, is marching on the capital. Against her better judgement, Queen Alwenna allows herself to be spirited away by one of the Crown’s most trusted servants, safe from the clutches of the throne’s would-be usurper.

Fleeing across country, she quickly comes to learn that her pampered existence has ill-equipped her for survival away from the comforts of the court. Alwenna must toughen up, and fast, if she is even to make it to a place of safety. But she has an even loftier aim – for after dreaming of her husband’s impending death, Alwenna knows she must turn around and head back to Highkell to save the land she loves, and the husband who adores her, or die in the attempt.

But Vasic the traitor is waiting. And this was all just as he planned.

I was so excited about getting this book and I couldn’t wait to read it! However, my copy had editorial notes throughout. It wasn’t until after I’d read most of it that I was sent an email about downloading a copy without the notes.I didn’t want to loose my place or have bits of the book move around on me so I opted to continue as I was. I’ll wait for the actual book to compare them!
I have to say though, the book could have done with a little more explanation, I did spend a lot of it confused. I think part of this was purposely, but I also wonder if something was edited out that was kind of important or if I missed something key somewhere.

The book is quite long which was exciting more than annoying because every time I checked there was so much left!!! It did feel like it was a little dragged out in the middle though, almost like the start and the second half and end were written and they needed a filler. The whole book takes place in under 18 days but it does feel a lot longer. I think we see each day but you do assume that a few days have passed as there’s no clear indicator until a little way into the book.

My favourite character switched while I was reading and at the moment I’m undecided. I’ll have to see what book 2 brings. Alwenna annoyed me though. She resists something that, were she to embrace it, would perhaps have helped her substantially. Hopefully she’ll embrace this in the future and step up. Where she is in her life now, it’s time for her to be taking a stand and pushing back. I’m hoping she will,. she seems the type and I really cant wait.

There’s obviously something far more going on within this world and I for one want to know it all.

I nearly didn’t add this last bit, I couldn’t quite work out how to say it without giving too much away but in the end I felt I had to bring it up as it’s something that, according to society, doesn’t exist and that’s man rape. Just because the body seems willing, doesn’t mean the guy actually is and in this instance the poor guy was barely awake, having spent the better part of two weeks at deaths door. Later, we find out the many things weren’t what they first seemed, but still, that initial interaction stuck with me enough for me to mention it. I don’t know what my mentioning it does, beyond calling attention to it, but I’ve mentioned it nevertheless.