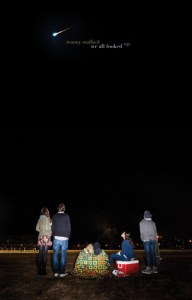 ‘”There’s still time for you to do things that matter. Even if it’s just being there for someone who’s freaking out.”‘ Loc 1186

This is my A Book That Made Me Cry choice for the 2015 Reading Challenge.

Before Ardor, we let ourselves be defined by labels – the athlete, the outcast, the slacker, the overachiever. But then we all looked up and everything changed. They said the asteroid would be here in two months. That gave us two months to leave our labels behind. Two months to become something bigger than what we’d been, something that would last even after the end. Two months to really live.

When I read the blurb I thought of Deep Impact and Armegeddon, and who wouldn’t when it talks of an asteroid that’s heading towards Earth and may destroy life as we know it! But We All Look Up, talks very little about what can be done to save the world. It instead takes a group of very ordinary teenagers and follows them as they come to terms with the possibilty that they may never get the chance to grow up, fall in love, go to college, or basically do anything that they dreamed they would do. It was a really emotional and poignant, character driven book. It questions you… What would you do if you only had 6 weeks left?

We All Looked Up is written from four points of view, Eliza (the punky girl that sleeps around), Andy (the junky with the skateboard), Peter (the jock with a soft side) and Anita (the posh, high achiever with no social life). I was surprised by how well it worked. Usually you would expect an average length book with more than 2 main characters to be a little lacking on the character development, but you’d be completely wrong here. Each character was totally unique. Tommy Wallach chose his wording well, for example I found, Anita’s chapters where much more intellectual and bossy with more fluidity and long words, while Eliza’s were more angry, more decisive with a false confidence that hid her vulnerability.

By having the four characters giving their point of view it allowed the book to be more brutal, more honest. I felt their fears, their worries and it was really touching. I must admit I did cry a little bit! It was a little angsty in places but that’s to be expected with teenage characters! I liked that the romances were sweet and well thought through.

This book was full of quotable lines,

I’ve seen this quote absolutely everywhere since I heard about this book, but there is no denying that it’s an amazing statement and completely highlights that this book is about the human need for connection. The need to feel ‘less alone’. I think this will resonate with most people, it definitely hit a chord with me.

‘As a little kid, Peter had figured that once you reached a certain age, somebody just handed you all the knowledge you’d need in order to be an adult. But it turned out that wasn’t how it worked at all.’ Loc 28

I loved that line. Its something that even at 28 I still think about. Adults always seemed so clued up on everything and now I realise, the majority of them are just winging it!

I was completely taken by surprise by We All Looked Up. I expected something harsh and gloomy, and yes in places I did get that, but I also got a story of hope, faith and an undeniable feeling that I am never alone. It’s a really moving story.

‘It turned out that no amount of terror could stop the great human need to connect. Or maybe, Anita thought, terror was actually at the heart of that need. After all, every life ended in apocalypse, in one way or another.’ Loc 3343