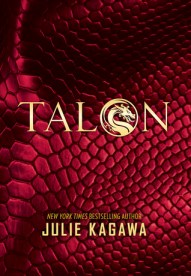 “The rogue dragon was trouble. Plain and simple.

And I was intrigued.”-

Long ago, dragons were hunted to near extinction by the Order of St. George, a legendary society of dragon slayers. Hiding in human form and growing their numbers in secret, the dragons of Talon have become strong and cunning, and they’re positioned to take over the world with humans none the wiser.

Ember and Dante Hill are the only sister and brother known to dragonkind. Trained to infiltrate society, Ember wants to live the teen experience and enjoy a summer of freedom before taking her destined place in Talon. But destiny is a matter of perspective, and a rogue dragon will soon challenge everything Ember has been taught. As Ember struggles to accept her future, she and her brother are hunted by the Order of St. George.

Soldier Garret Xavier Sebastian has a mission to seek and destroy all dragons, and Talon’s newest recruits in particular. But he cannot kill unless he is certain he has found his prey: and nothing is certain about Ember Hill. Faced with Ember’s bravery, confidence and all-too-human desires, Garret begins to question everything that the Order has ingrained in him: and what he might be willing to give up to find the truth about dragons

I wasn’t planning on reading this series, considering the premise of this book is very similar to FIRELIGHT by Sophie Jordan which I read four years ago. However, given the chance to read book two early for a review, I said yes and I’m glad I did. Though the premise is indeed very similar and one of the love interests (yes, I said one of. We’ll get to that) is also an arch nemesis, the rest of the story is vastly different. However I still ended up comparing much of it throughout reading it.

The book is in first person, split into two parts and part one is narrated by Ember and Garrat, part two has the added narrative from Cobalt and the epilogue is Dante, just to keep you on your toes. I quite liked this and was rather exited to read Cobalts’ sections. The Dante one at the end was a nice twist and makes me curious about how much he’ll be in the second book. Also, there’s a big ol’ ‘WHY?!’ connected to this which will hopefully be addressed too. As to Dante as a whole; what an idiot.

One thing that got on my nerves was when they talked about “my dragon didn’t like it”. I’ve seen this in shape-shifter stories before, but this time it annoyed me cause they WERE dragons, simply taking human form. Which got me thinking about why the others didn’t annoy me and whether they will now, but I digress. I’m now confused, does this mean that they have two beings? Should they have two names? But if they’re the same in both form does that not mean that they’re one? Does this even make sense?

Yes there is a love triangle, which I’ve mostly ignored. It’s one that is bearable and interestingly there doesn’t seem to be hints as to whom it is we should be rooting for. Unless there is and I don’t agree so I’m actively ignoring that too… We’re introduced first to Garret and he’s the main love interest, in this book at least, then there’s Cobalt. Having the dragon love interest from firelight in my mind (Sorry) I was prepared to dislike Cobalt, however he is very much my favourite as a character as well as love interest, I mean, he’s a biker with gold eyes who rescues hatchlings and spends half of his time as a blue dragon? Yes please.
I look forward to seeing more of him in the next book and if Ember ends up with anyone but him, I wont be happy…