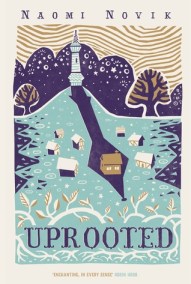 Agnieszka loves her valley home, her quiet village, the forests and the bright shining river. But the corrupted wood stands on the border, full of malevolent power, and its shadow lies over her life. Her people rely on the cold, ambitious wizard, known only as the Dragon, to keep the wood’s powers at bay. But he demands a terrible price for his help: one young woman must be handed over to serve him for ten years, a fate almost as terrible as being lost to the wood. The next choosing is fast approaching, and Agnieszka is afraid. She knows – everyone knows – that the Dragon will take Kasia: beautiful, graceful, brave Kasia – all the things Agnieszka isn’t – and her dearest friend in the world. And there is no way to save her. But no one can predict how or why the Dragon chooses a girl. And when he comes, it is not Kasia he will take with him. From the author of the Temeraire series comes this hugely imaginative, engrossing and vivid fantasy novel, inspired by folk and fairy tales. It is perfect reading for fans of Robin Hobb and Trudi Canavan.

Ms4Tune recommended thus to me, having read it herself (Her review can be found HERE). I was happy to discover it was exactly my type of book. Magic, adventure and just a touch of romance. I also, oddly, liked that the blurb spanned only the first five minutes of the actually story and I have to say I loved what was going on just as much as the outcome. The fact that there was another type of magic, almost completely forgotten and how, by using it, she was phenomenal but when using magic their way, she barely managed anything. (Sort of like forcing everyone through the same education system or giving everyone the same medication for different types of the same thing).

And the ending. That was perfect. I hope that the answer would be something like that!
I’d have to say my favourite character was probably The Dragon (Sarkan). Bless him, he was getting a little disillusioned with life and I wished we got to see some of it from his point of view (it’s first person) because she pretty much just turns his world upside down. He’d sorted the world into nice neat boxes, thankyouverymuch and she basically came along and moved everything around.

I didn’t much like Marek, or his pet Magician Solya, or many of the others actually. They were all arrogant in what they assumed to be right and they weren’t willing to accept they were wrong, almost even as the walls shook around them, despite the fact that she was living it, pretty much because she was young. The whole thing had sort of a Russian Fairytale feel to it, which – having given the acknowledgements a quick glance – was where her inspiration came from. I don’t know much about Russian farytales (not from lack of trying, getting a nice, affordable fairytales book which is just the fairytales and not break downs and analysis is surprisingly hard. I have the same issue with myths and legends too!)

I was a little sad about the qualifying process though, I wanted her to have a name like Sarkan does (when you get to this bit, because you’re going to read it, you’ll see what I mean), but I Guess that her not was sort of the point. Different is not wrong and destruction isn’t always the answer.