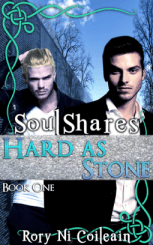 Tiernan Guaire was exiled from the Fae Realm a century and a half ago for his brother’s murder. His soul torn in half, he lives by his vows — never to trust, never to love. And if he can only be whole by finding and loving the human with the other half of his soul? He’s content to live broken and half-souled.
Kevin Almstead’s future, the career he’s worked for as long as he can remember, has been taken away by a vote of the partners at his law firm. Chance brings him to Purgatory, the hottest all-male nightclub in Washington, D.C., to a meeting with a Fae, with long blond hair, ice-blue eyes, and a smile promising pleasures he’s never dreamed of. But there’s no such thing as chance.
But Tiernan isn’t the only one to find Kevin in Purgatory. The most ancient enemy of the Fae race sees in the handsome lawyer a way to destroy the world from which it, too, was exiled. And only the strength of a true SoulShare bond can keep it from what it seeks

I found the concept of this story thoroughly fascinating and I hope to read the rest of the series soon because it’s clearly only the beginning of the story. I have to say it was also pretty steamy too!

Kevin put up with a lot from Tiernan, but to be fair, he knew what he was getting into from the start, Tiernan was very clear and he was happy with it. In fact at the end, he got far more than he thought he ever would.

I’m curious as to all the HOWS and WHYS of their world(s), the Sundering and the SoulShares.
And you know what I liked? Keven was completely fine with being fated for Tiernan, despite the fact that he’s never been attracted to males before. He later finds a name to label himself with, but I liked how accepting he was and how he didn’t agonize over the fact he had no choice in the matter. It was so refreshing to read something where there were no separations, no conflicts and no falling outs. There was a little not talking, but what do you expect when they’ve just met and they’re going to be together forever…

Obviously, this being an adult book, the steamy bits are rather major and crop up regularly, but this book has a good storyline to go with it. It’s strong enough to carry through the 4 books of this series and I really want to know what is going to happen next. And it was totally sneaky to throw in not only one of the guys to book 2, but one of them from book 4! Now that one, I want to see how he fits in with this because, having read the blurbs to 2 – 4 it was a complete shocker!