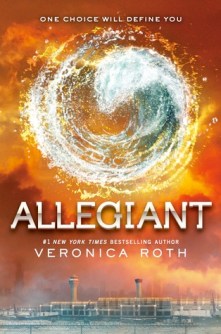 “All I can hear in my mind are the words I said to him a few days ago: I would never deliver you to your own execution.” – page 455

It’s hardly been any time at all since Tris chose to leave the faction she was born into and her life hasn’t been easy since. Barely out of the strife that has thrown her city into chaos, she jumps at the chance to explore the world outside the one she knew, hoping to leave behind the loss and betrayal and start a new life.
But once there she discovers that what’s outside mirrors that within forcing her, once again, to make difficult choices.

I said it at the end of the first, thought it thought the second and must express the same feeling for a third time: I really don’t think all those deaths were necessary!!!

How do you go about reviewing a good book you didn’t like? I can’t say anything I want to, for it will give away the game.  The way the book is written, perhaps should have given me a clue.  It was well delivered and the explanations were believable and terrible, just like something humanity would do, but I don’t think I’ll be reading it again even if it did make me want to re read book one.