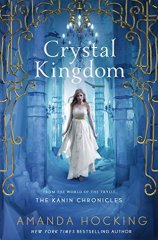 WARNING: This review may contain SPOILERS for this book and the previous 2.

Cast out by her kingdom and far from home, she’s the Kanin people’s only hope.

Bryn Aven – unjustly charged with murder and treason – is on the run. The one person who can help is her greatest enemy, the enigmatic Konstantin Black. Konstantin is her only ally against those who have taken over her kingdom and threaten to destroy everything she holds dear. But can she trust him?

As Bryn fights to clear her name, the Kanin rulers’ darkest secrets are coming to light… and now the entire troll world is on the brink of war. Will it tear Bryn from Ridley Dresden, the only guy she’s ever loved? And can she join forces with Finn Holmes and the Trylle kingdom? One thing is certain: an epic battle is underway—and when it’s complete, nothing will ever be the same…

Crystal Kingdom continues on from where Ice Kissed finished. I would advice that it really needs to be read as the third book in the series otherwise you will miss out on the introduction and development of some of the other (less mentioned) characters in this book. You will also miss some essential bonding between characters.

In Crystal Kingdom Bryn is yet again, running around from Troll kingdom to Troll kingdom. This time because she has been charged with Treason and can’t return to Kanin till she’s cleared her name. Bryn teams up with Konstantin Black and starts to unravel the secrets behind the attacks on the Kanin. She discovers that Queen Mina isn’t who she seems, and that she is a lot more dangerous than originally thought. Bryn must convince both the Trylle and the Skojan to help her to dethrone Mina before its to late and many innocent lives are lost.

I can’t say I was the biggest fan of Bryn in this latest instalment of the Kanin Chronicles. I found her compulsive and irrational. She seemed to jump in before thinking anything through properly. She constantly ordered other people around, including royalty. I’m surprised she’s survived as long as she has! There were quite a few deaths in this book and for a couple, I couldn’t help but blame Bryn. She pushed people into situations that endangered their lives and then couldn’t understand why they got hurt. It annoyed me even more that she then went around feeling sorry for herself looking for condolences and justification. No Bryn, sometimes it really is your fault and you have to live with it! It also annoyed me that she kept on about not hurting innocent Kanin but was happy to kill Omte without thinking about how they could have been placed in the crossfire too by other evil people. I was glad that Konstantin brought this up, and confronted her about it. Unfortunately she then went off on a tangent about rescuing her family and friends and didn’t really consider that there would be many other innocent people stuck in Kanin still and that by rescuing HER people she would tip off the opposition to their presence. As I said… she really didn’t think anything through. She just seemed a little self-centred.

There were things I did like though. I enjoyed the addition of Embers letters to Bryn (they were more like diary entries). Ember was a lovely character and it was cute reading about her and Delilah’s relationship blossoming. It also gave you a good view of Kanin from the inside. I also still love Ridley. I was glad that he stuck with his feels for Bryn, even when Bryn was giving him the hard shoulder (in Ice Kissed). I didn’t think it was necessary to throw in a small side romance with Konstantin it would have worked with a strong friendship just as well.

Overall this was an ok ending to the series but I think my hopes outweighed what I actually got. I still think this will be a huge hit for many other people. It just wasn’t for me. I don’t regret finishing the series though.