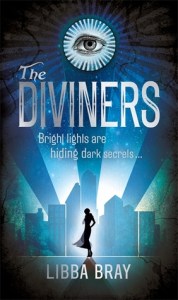 “When the world moves forward too fast for some people, they try to pull us all back with their fear.” P.483

This is my A Book With Over 500 Pages choice for the 2015 Reading Challenge.

It’s 1920s New York City. It’s flappers and Follies, jazz and gin. It’s after the war but before the depression. And for certain group of bright young things it’s the opportunity to party like never before.

For Evie O’Neill, it’s escape. She’s never fit in in small town Ohio and when she causes yet another scandal, she’s shipped off to stay with an uncle in the big city. But far from being exile, this is exactly what she’s always wanted: the chance to show how thoroughly modern and incredibly daring she can be.

But New York City isn’t about just jazz babies and follies girls. It has a darker side. Young women are being murdered across the city. And these aren’t crimes of passion. They’re gruesome. They’re planned. They bear a strange resemblance to an obscure group of tarot cards. And the New York City police can’t solve them alone.

Evie wasn’t just escaping the stifling life of Ohio, she was running from the knowledge of what she could do. She has a secret. A mysterious power that could help catch the killer – if he doesn’t catch her first.

I’ve had The Diviners on my bookshelves for quite sometime but have been delaying reading it. Something about the sheer size of this beast of a book, put me off. I presumed it would take me ages to read. So I have ignored it for about 2 years now. But when I saw Lair of Dreams (the sequel) on Netgalley… well I couldn’t resist clicking the request button… silly, right? When two books in a series collectively have 1,216 pages, you would think it’s probably a good idea to see if you actually like the style and storyline of the first book before committing to reviewing book 2! But that’s not how I roll!

So it was with great trepidation that I picked up my hardback copy of The Diviners with its 592 pages… and… it was magnificent! I devoured it in less than three days. 592 pages? What 592 pages… before I knew it, it was over and I was left rubbing my bleary eyes, looking at the world thinking where did all the flappers go?? I can honestly say that I was that absorbed in this book that, in the wee hours of the morning when I was trying to secretly finish this book because it had got to the really creepy climax, I actually screamed when my husband rolled over in the bed… lets just say he wasn’t overly impressed.

I can imagine this book isn’t for everyone as there is a lot of scene setting and world-building that at times it seems that very little happens. And actually, thinking about it, not a lot does happen… Somehow, I didn’t seem to notice the lack of action, because there was a great balance of history, theology, supernatural and character development, all told with a great sense of humour. For me, the detailing created the most amazing atmosphere, and made me feel as though I was actually part of the 1920′s New York scene, and in my opinion, that is the best kind of book. One that makes such a strong connection with you, that you forget what’s real and what’s not. When you can see every little detail in bright techni-colour detail!

There are numerous characters in the Diviners and each one plays a part. I liked that the point of view, continuously changed as I loved getting little snippets of each characters secrets and backgrounds. My favourite story lines were Jericho’s and Theta’s. I can’t wait to find out more about them in the sequel. But the main storyline followed Evie. She was a little selfish and naive at the beginning but went through a believable transformation that left me utterly in love with her. I liked that there were small touches of romance that in no way derailed the story but most of all I loved the dynamic friendships that grew between the characters. I got quite excited as all the different characters started to meet!

I applaud Ms Bray on the creation of a villain who’s creepy nature rivals Jack the Ripper and Hannibal Lector! I have had many nightmares where I’ve been chased down dark, damp brick alleys, by a shadowy man who walked with a thud thud click and an eerily whistled tune that  echoed of the walls around me. The symbolic killings were significantly dramatic, but left most of the gory scenes to your imagination. A total stroke of genius, in my opinion, because there’s nothing more bone-chilling than the gruesome details your own brain fills in!

I can’t say much more because I don’t want to give anything away.

In the end all I can say is that this book was outstanding. It was beautifully written with a wonderful balance of 1920′s atmospheric charm and paranormal excitement. And had a wonderful cast of lovable and sassy characters. I would recommend this to anyone looking for a thriller that’s just a little different!