by Cindy Dees and Bill Flippin 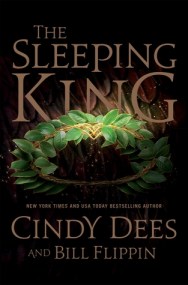 The Sleeping King is the start of a new fantasy series by New York Times and USA Today bestselling author, Cindy Dees.

Dees has won a Golden Heart Award, two RITAs for Category Suspense and Adventure and has also twice snared RT’s Series Romantic Suspense of the Year. She is a great storyteller, and the adventures in her more than fifty novels are often inspired by her own life. Dees is an Air Force vet-the youngest female pilot in Air Force history-and fought in the first Gulf War. She’s had amazing adventures, and she’s used her experiences to tell some kickass stories.

But as much as she love romances, Cindy’s other passion has been fantasy gaming. For almost twenty years she’s been involved with Dragon Crest, one of the original live action role-playing games. She’s the story content creator on the game, and wanted to do an epic fantasy based on it, with the blessing and input of Dragon Crest founder Bill Flippin.

The Sleeping King is the first in an epic fantasy series, featuring the best of the genre: near immortal imperial overlords, a prophecy of a sleeping elven king who’s said to be the savior of the races . . . and two young people who are set on a path to save the day.

Goodreads says this book has 496 pages. My kindle app didn’t agree However. 32 hours it told me. that’s over 1000 pages! It took a long time to read any way you slice it. Did I mind? Not really.
I also missed the part in the above description that told you it was based off a LARPG, so when I got to the end and discovered this, it was a surprise. Especially as, as long as it was, this wasn’t the end!!!

So what is the story actually about?
In a world called “Urth” (get it??) an Eternal Emperor rules with absolute power. But in a newly settled land something is stirring while a prophecy is surfacing about someone with no name and the Emperor can’t afford to let it come true. But forces have been moving for some time and an old quest is taken up, accidentally, by a new crew. Reluctant at first, they fall into their destiny ready to see it through to the end.

Despite it’s phenomenal length, there was little to be bored over. I rather liked how the book started,the first people we meet are not the main characters, but they set up the story in a very important way and it was written so well that when I was putting the book down it was more to do with the fact I’d been reading too long and not because I’d found a boring bit.

It’s written a little like the A Song of Ice and Fire series (Game of Thrones) or Cloud Atlas, various parts of stories, told about different people, until paths cross and people meet up. You could really feel it building, all the possible places for them to meet…and then they did meet…and then there was a new character. What?

After that lengthy introduction to this world, I hope that they finish soon and write all the books. I want to know how the little subplots fit in and how everything that needs to happen will happen. And to see all the parts I thought were loose ends incorporated back in, nice and neatly. Also, I just want to join them on the next leg of their journey so I can finally pick a favourite!

Please don’t let the length of this book put you off. While the start may be a little confusing (introducing with someone other than the main characters!?) you really won’t notice once you get going and soon you’ll be wondering how everything that needs to happen will fit into the rest of the book.

I have to add, at one point there is a line about racism being forgotten in death and this stood out for me, because in this instance it truly was racism. (Not to say ‘racism’ doesn’t exist, but in truth, surely it’s more characteristicism, because we’re all the HUMAN RACE so we’re all the same race so race-ism doesn’t make sense…) because in this world, there are humans and elves and beast people and other things I can’t spell and they’re clearly all different races.