This recipe was found by someone I work with for something and to further the project I made them. It was found from the schoobyaddicts website I believe.

I used whole wheat flour to make it more scooby snack like and used self raising instead of adding the baking powder. However when I had everything together it was very wet. Maybe  the butter needed to be boiling hot or something, I don’t know. I ended up adding A LOT of flour and coconut to the original mix – about 8 tablespoons in the end – to get it to a dough like consistency that could be moulded and turned into biscuits.

Then it was just a case of molding them into triangles and carving in SD. Which wasn’t the easiest. I quickly got bored. 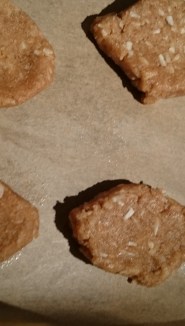 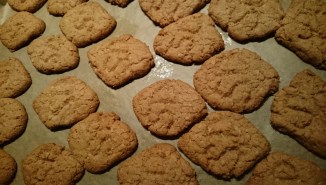 As there’s an egg in the recipe the biscuits spread. Also to get them cooked I had to leave them a little while and they ended up very crunchy. They were well received but I think if I need to make them again I’ll find another recipe.