Upon a return from visiting the family, my mother and I were looking for a recipe and came across this. As soon as it was mentioned my dad developed a terrible, terrible cough…

I originally took many photos of the entire process…however I’ve swapped phones since then and I’m not sure where they’ve gone at all, so I’m sorry about that.

You have to prep for this one the night before.
I doubled the recipe to make sure I covered everyone I know whose been coming down with coughs, just in case the stuff is actually beneficial. I wasn’t sure how long to wait for the ‘firm ball’ result, I really should have got out my sugar thermometer, but I was being lazy. Don’t be lazy!

Still, it turned out pretty well. I cleverly left the lemon rind on the aga before I needed it so it dried out, which also impacted it I’m sure. You find bits as you go.
It ended up thicker than it was meant to but no one has complained. At all.
And I had trouble breaking it up. I used a hammer wrapped in foil but it broke through the foil pretty quickly so I have it a really good wash and used the hammer by itself – filling three half litre Kilner jars, two quarter litre jars and a half litre jam jar. 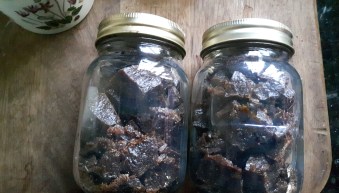 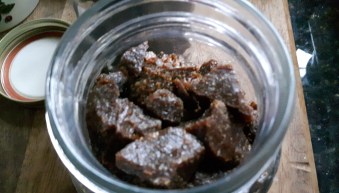 It certainly tastes like treacle, not much like toffee however – is it meant to be? – and it’s tasty. Does it help with coughs? No idea. I’ve been mercifully cough free this year! Have you tried it? Does it work on your coughs? Let me know!