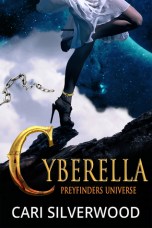 Thank you to Netgalley and the publisher for giving me the chance to read this book in exchange for an honest review.
Published: 9th November 2015

Accepting herself when much of her is cybernetic is Ella’s never-ending struggle.

When she’s captured by Torgeir, an alien, mercenary ex-lordship, she prays her struggle is over. He knows what she is and still wants her.

But there are cracks in the mirror…

A lunatic wants to make her his princess, after he modifies her.

What happened to this girl who was, once upon a time, a perfect human being?

Can even her beloved Torgeir love a girl who is nothing like she should be?

The crunch of revelation is coming and this is one cyber-girl who doesn’t like being kept in the dark.

This was odd. I’m going to blame some of that on the fact that it’s set in a universe whose books I haven’t read. I now own book one so I can see what of the world made no sense and what just didn’t make sense because I hadn’t read the 3 preyfinder books.
There were some moments where the writing was off, I’m hoping that’s because my copy was an uncorrected copy and it still needed to be edited.

The concept of this story was interesting, not only was it a Cinderella themed story, it seemed to also have a beauty and the beast theme too. The storyline was interesting – it wasn’t all about the sex, though it was a key point to the plotline, but at the same time something was missing – again this could be just because I’m new to this world. However it did bother me that we didn’t see much about her being cyborg until she needed to be, I wasn’t sure what was cyborg either, it sounded like all of her limbs should be but I don’t think they were. It was a little confusing.

The mating thing was an interesting concept too almost like the idea of soulmates, it’s one that I’m interested in learning more about, which is another reason why I’ve purchased the first one, to see if I can learn more.
The books reminded me a lot of Firefly, which was nice as I miss it, but the bad guys were beyond my concept – again something I hope the first book will help me to understand.