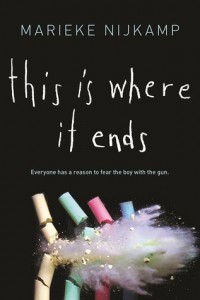 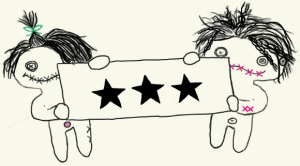 Thank you to Netgalley and the Publisher for giving me a copy of the book in exchange for an honest review.
Published 30th October 2015

‘Run if you can. Hide if you have to. Don’t be a target. It’s the first thing all the instructions of our lockdown drills taught us: get yourself to safety.’ Loc 377

This Is Where It Ends is dramatic, it’s shocking, it’s gripping, but most of all it’s upsetting, because you can’t hide from the realization that this, actually happens in real life. Marieke Nijkamp has taken a very difficult and prominent subject matter, (gun crime in schools), and has created a very emotional account of 54 minutes that change the lives of everyone in the town of Opportunity.

The story is told from four different points of view. Each of the characters has a connection to the shooter and this is revealed through small flashbacks to events prior to the shooting. Each character holds a little piece of the puzzle but the biggest puzzle piece is hidden. We never see anything from the shooters point of view and I think that was a shame, but understandable.

The four characters are, Autumn who is the shooters sister, Claire who is the shooters ex, Sylv who is Autumns girlfriend, and Tomas who is Sylv’s brother. Tyler is the shooter, and he hates everyone, he blames everyone for his isolation and he wants people to take notice of him, sadly he feels he has to go to extremes to get this. In amongst the narratives is media extracts: text messages, answerphone messages, blog posts and twitter feeds, all giving a brief cut away to what the outside world must be seeing and giving you another view of the terrified people. It took me a while to get used to who everyone was. Claire was easiest to distinguish because she was outside of the school and Tomas was the only guy POV, but Autumn and Sylv confused me. They were both very similar and seemed to think the same way. I thought the media extracts were a clever idea but they didn’t quite work for me, they were just a distraction from the suspense!

There is a lot of action, a lot of upsetting and heart-wrenching moments in this. I couldn’t stop reading because I had to know if the characters would survive. The ending was predictable and infuriating because I wanted justice! It left an empty and bitter feeling in my stomach.

I wish there had been more of the flashbacks, I’d like to know more, see more, FEEL more. Especially more about Claire and Tyler’s relationship, I don’t think this was given enough pages and so I didn’t quite get her feeling of betrayal. She may as well have not been his ex at all.

This isn’t a book I can say is enjoyable but I can say its a good representation of the fear and complicated mess that comes about from a shocking shooting. It’s an impressive debut, and I commend Nijkamp for her courage. I don’t think there are many authors who would tackle this kind of story!