by A. L. Waddington 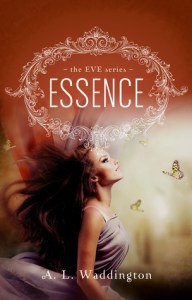 “Time will reveal my love…”

Essence had a very unique concept. Jocelyn is your average high school student in 2009, who meets a boy named Jackson and for some strange reason feels drawn to him. As if she’s met him before somehow but she finds that she has the strangest reaction when they touch. She blacks out! But whilst blacked out she sees visions. On the other hand, Jocelyn could be a young lady from the late nineteenth century, engaged to a Mr Jackson Chandler. A Jackson who gives her a beautiful pocket watch as a birthday present. Although she finds that she also blacks out and sees visions when she touches the watch. Or is she both?

The story is told in alternating chapters between the Jocelyn of 2009 and the Jocelyn of 1878. I found that the character development was flawless. Not only did I find that I cared greatly about both Jocelyns and Jacksons, but that I also loved the numerous supporting characters, such as Olivia and William, Jenna, Mr and Mrs Chandler etc. I loved that Waddington has used two different styles to distinguish between the two time periods. She adopts a more suitable grammar and diction for the 1878’s while the 2009 chapters include more slang terms and grammar more common now. This heightened the sense of each period for me.

While the pace was slow, I managed to read about 60% without questioning too much. There seems to be very little in the way of action other than the blackout visions, apart from a scandalous pregnancy situation which made me way more interested in the 1878 chapters than the 2009 ones! But after this was sorted, I started to wonder whether the pace would pick up now as it was beginning to drag. My biggest worry was that we wouldn’t find out the cause of both Jocelyn’s episodes. Thankfully we did. However I found the explanation to be a little confusing. It seemed a little forced considering how well the rest of the book had flowed. Maybe I feel this way because the explanation was only in the last two chapters. I hope that there will be a fuller explanation to come later in the series.

As others have pointed out this book needs ‘a bit of a tweek’ editorially speaking but I wasn’t put off by the few mistakes that I noticed. All in all, a good start to what promises to be an interesting YA time-traveling romance series.