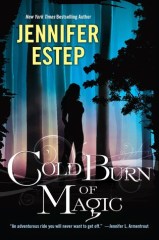 Thank you to Netgalley and the Publisher for giving me a copy of the book in exchange for an honest review.
Publish Date: April 28th 2015

But then some nasty characters bring their Family feud into my friend’s pawn shop, and I have to make a call–get involved, or watch a cute guy die because I didn’t. I guess I made the wrong choice, because now I’m stuck putting everything on the line for Devon Sinclair. My mom was murdered because of the Families, and it looks like I’m going to end up just like her. .

Paein’s review of this can be found HERE.

I’m actually really surprised by how much I ended up enjoying Cold Burn of Magic, basically because it started off really heavy! My first impressions were that there was a lot of magic and world building details to absorb and it felt like it was all just being dumped on me in the first few chapters, but once the story kicked in, that depth and knowledge actually cranked up the storyline and I freaking loved it!

In the first few chapters we were thrown into a world full of magic and monsters, thieves and feuding families, into a world supposedly similar to our own but completely different at the same time. I found it a little hard to grasp initially but eventually I started to make sense of it all. Cloudburst Falls is a town that sells itself as a tourist resort where us mere mortals can go and gork at magical beings and monsters. It’s overseen by a number of magical families (in the godfather mob family sense) who run different aspects of the town and fight over different territories.

Lily is an orphan and thief who makes her living by stealing and flying under the radar. But one day she finds herself smack bang in the middle of a family war. And finds she can no longer hide. Lily reluctantly takes the job of being the bodyguard to Devon, the son of the Sinclair Family’s leader. not the easiest job considering someone out there is trying to kill him. Lily must figure out who that is before she joins the long list of dead guards who’ve tried, and failed, before her.

I really liked Lily, she was sparky and smart and kicked arse! She never backed down and always fought for what she thought was right. It was really easy to understand her and with so much background information, she felt more like a friend than a random character.

I loved the dynamic between her, Felixstowe and Devon. Their banter was amusing and made for light relief in a rather dark plot. I was impressed by how many of the secondary characters stood out, I mean, with a world that in depth and a main character that was thoroughly fleshed out, I couldn’t imagine that anyone else would really get a chance to shine but I was wrong. Even Dear, the bitchy rival family female had a personality!

I enjoyed that there were quite a few other minor storylines runninh alongside the main ‘find the attacker’ storyline, and that these have been left as the juicy enticing lead ins to book 2 rather than dragging out this plot. Its just nice to feel satisfied by an ending but also excited about the what the next book will have in store.

Overall, I’m very happy with this new world that Jennifer Estep has created and can’t wait to return to it soon!