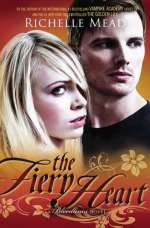 Sydney Sage is an Alchemist, one of a group of humans who dabble in magic and serve to bridge the worlds of humans and vampires. They protect vampire secrets – and human lives.
In The Indigo Spell, Sydney was torn between the Alchemist way of life and what her heart and gut were telling her to do. And in one breathtaking moment that Richelle Mead fans will never forget, she made a decision that shocked even her…
But the struggle isn’t over for Sydney. As she navigates the aftermath of her life-changing decision, she still finds herself pulled in too many directions at once. Her sister Zoe has arrived, and while Sydney longs to grow closer to her, there’s still so much she must keep secret. Working with Marcus has changed the way she views the Alchemists, and Sydney must tread a careful path as she harnesses her profound magical ability to undermine the way of life she was raised to defend. Consumed by passion and vengeance, Sydney struggles to keep her secret life under wraps as the threat of exposure — and re-education — looms larger than ever.
Pulses will race throughout this smouldering fourth instalment in the New York Times best-selling Bloodlines series, where no secret is safe.

my review for book three can be found HERE.

Aww man, don’t fall apart now Adrian, you’ll think of something! Lets get this show on the road so that I can find out what exactly he comes up with shall we?

So I had a break between books 3 and 4. I felt it was all getting a bit blah. Book 4 certainly fixed that. Not only do we have the added POV switch between Sydney and Adrian that apparently failed in the first draft of book 1, we have added drama. So much drama actually, it’s hard to work out how many storylines are going on here, so many secret trips and possible couples and general confusion going on.
I can also see why the POV switch didn’t work earlier. Adrian is now a different man than he was and we needed to like him before now. There’s no garantee we would have, being inside his head. He struggled with that too, after all.

It wasn’t until this one that I realised that these books cover mental illnesses. Mostly it’s covered by ‘magic fall out’, but it’s there. I don’t want to give away too much, but in the first series, Lissa had issues with depression. In this series, Adrian has his own issues and as we know Sydney had dieting and possible anorexia issues. I don’t think this one is covered enough, she does seem to sort it quite easily, but then the other issues are also perhaps ‘solved’ too easily as well – though you CAN argue, they are after all magical side effects. When I realised this, I was surprised. I was too pre-occupied in the first series with how they’d ‘changed’ it all in the film, and when it truly clicked in this book I was impressed. These characters need help and -eventually – seek it, nothing wrong with that.

So Sydney’s sister is here and she’s pretty brainwashed. She was getting better but then things sort of got out of hand….now we’ve got a situation going on and I hope at some point Sydney gets a chance to break out her bad-arsery. I also think Adrian needs to bite everything that moves and pull in reinforcements. If he told it like it is I’m sure his friends would haul arse to help. What could actually go down could be phenomenally epic – if he’ll only just stay away from those bars….