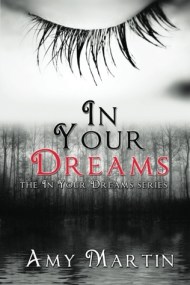 “Should I be down on one knee or something? I have no idea how this is supposed to work.” “I think the down-on-one-knee stuff comes later.” I say with a straight face. Like, way way later.” -54%

Title:  In Your Dreams
Author: Amy Martin
Book: 1 of In your Dreams series
Genre: YA
Found: via BookBub emails
Rating: 4 voodoos

Zip (Zara) McKee thinks of nothing but the future and getting out of her tiny town where everyone has known everyone since birth. That is until the new boy passes out on her desk…..
Kieran has narcolepsy, which makes him scary to everyone in his new home town, except Zip. Having much in common, he’s soon confiding in her; he sees the future in his dreams.
Just as things begin to settle, Kieran’s parents drop the bombshell that his sleeping disorder is not all it seems.

I was in a bit of a book funk and after a prodding I picked a number (12, if you’re curious) with the intent of reading the 12th most recent book on my list. Which turned out to be this lovely little freebee…

This was a nice read, they worked together instead of hording secrets and having fights. Personally if it was me, I’d have written more humour into his blackouts but I guess that would take away from the overall storyline too much, as it gets a little serious.

I liked the characters, Kieran was my favourite, though he did get a little moody, bless him. I’d like to read the others sometime too, as I like to know how things end but by now you have to know of my fear of YA sequels….