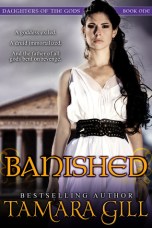 “She picked up her beer and sipped it in the hope it might settle her fluttering stomach. Why was this stranger making her nervous?”
- 19%

Chloe, beautiful and privileged daughter of a powerful god, literally has the world at her feet. Until she falls in love with a Scottish druid. Her enraged father sentences her to an endless cycle of birth and death; each life spent yearning for a man she no longer knows or remembers.

Scottish druid, Cian McKay searches the world for his long lost love, only to have her appear at the local pub in his highland hometown. Cian must win Chloe’s heart again but without the ability to tell her who she is.

Back in the place where she first loved Cian and fell from grace, Chloe’s memory haunts her with images that could not possibly be true. She must find the truth and the only way is a confrontation with the Deity who banished her a thousand years before – her father, Zeus.

I think I must say this every time I come across this is a book apparently about a Scotsman or in Scotland. Plaid does not mean tartan. It cannot be used to mean a tartan pattern either. In fact ‘Plaide [pLad'I]‘ is Scottish Gaelic for blanket (which was one of the functions of the back part of the old kilts). And if the confusion has been going on THAT long, I realise I’m not making any difference, but I can still complain about it all over the place.

I really enjoyed the start of this story, I sort of relaxed into it and it flowed well. The set up and introduction did a good job of snagging me and keeping me interested. I was sort of disappointed that she had a fiance because that then made it a love triangle sort of shape, but the break up between her and her fiance was just so bleh. I wanted him gone but not with just a shrug and a ‘see ya later’, it just should have had more impact. They were getting ready to spend their lives together and neither one seemed particularly bothered. Chloe sort of tried to pretend to be bothered, mostly because she was running from Cian and how she felt about him.

I also found Chloe somewhat annoying, sure Cian seemed arrogant when he was all “i know what you feel” but in this case he had good reason and it affected her own self the most. There also seemed little explanation to the events after she remembered everything. I thought she was mortal but then all this stuff happened and I got quite confused.

The ending also seemed quite sudden too. She thought about a plan and it was done. Perhaps it was the format of the e-book? Who knows.

I’d like to know what happens in the rest of the series, it seems to be about Chloe’s sisters/half sisters so we’ll see about that.