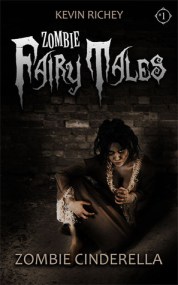 ” ‘Cinderella!’ she cried. but she couldn’t think of anything more to say.
There was something eerie about the darkness, something unnatural, that held her back.”
-Page

On the day her father is buried, Cinderella’s stepmother forces her to wait upon her ugly stepsisters as they prepare for a frivolous ball. Poor Cinderella is literally worked to death by her in-laws, and left to die alone in the cinders. But thanks to an infection from a mysterious old woman, Cinderella is granted a chance for revenge. Soon, it will be midnight, and everyone will be washing floors – with blood.

I loved how horrific the step family was. I don’t think I’ve ever read a Cinderella story where they were quite so awful. Nor one where Cinderella’s father died the same night as the ball. The short notice invite seemed a little silly, but quite possible – less prep time means less fakery. I liked it. Though if it had been a normal Cinderella story, one could say that she married the prince because of her broken heart. But it’s not that kind of story.

I find myself sad that the family is likely to only die. They were a particular shade of vindictive and I’d have liked to have seen them becoming low paid servants or being thrown into prison or something. They were the worst! They seriously had some Cinderella hate going on. She was completely blindsided. We don’t know enough about cinderella – is she the lovely girl from the fairytales? Or as the steps say – lazy and nasty? It’s not too important honestly, we feel sorry for her either way.

My biggest complaint is this is only half the story, part 2 is actually book 6 in the series. This is vastly annoying but I’m happy with leaving this story here. It had a well written introduction and it was pretty interesting to read, but I don’t think I want to run through another 4 stories to reach Cinderella’s conclusion. So why don’t I just skip? Well, because there will be some cross over and I’ll get annoyed and then feel like I need to read the others. A clever marketing scheme, but one that sometimes has the opposite effect.