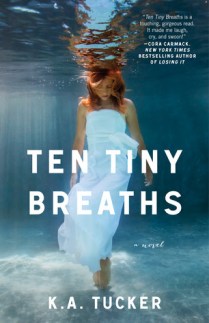 Kasey runs to Miami with her 15 year old sister in tow to escape their life there. Alone in the world Kasey is determined to give her sister the life she deserves. But surviving the car crash that killed her parents, boyfriend and best friend has left Kasey more than a little broken. She’s trying to hold it together, but it’s fraying at the seams. That is until one of their neighbours offers to get Kasey a job where she works and their other neighbour can’t seem to keep his eyes off her.

Kasey intends to keep the past buried deep and to keep moving forwards, but some things can’t be hidden and she’s not the only one with a massive secret…

I quite enjoyed this book. More for what the story could be than for what it was, as there were some points I feel should have been given more consideration.
I enjoy books for the storyline and if it’s good enough the writing won’t bother me particularly much. Unless it’s a second reading or there’s a sequel. However, every now and then I’ll be shaken out of my blissful stupor as something nabs me (for example, in the uk the age for drinking alcohol is 18. You cannot sell alcohol until you’re 18. Yet, Kasey in America, is selling alcohol at 20. Is the liquor age different in Miami? Or can you sell it before you can drink it?)
Often I delude myself into thinking a book is better than it was and often the reviews others leave cause me to go back and reassess my assessment. I feel this is a book that will be picked apart by critics and this is what I hate most about reviews; it needs to be done and I hate doing it. BUT, this is why I’m here, so without further ado, here we go…

Firstly we’re in Kaseys head here, so I’m assuming that’s why the story is dominated by her, but the fact that she was in a car accident and lost not only her parents, but her boyfriend and best friend two is a little over the top. Especially as her sister was meant to be in the car too. Uh, where?
So she has a hard time of it until her sister begs her to stop, where by she becomes all straightish and narrowish and moves her sister away from their creepy uncle. They move in next to a hunk and a babe. The babe becomes their best friend and the hunk is, of course, interested in Kasey.
Perhaps Karma’s apologising, because after their terrible luck so far, they have a pretty decent run of the good stuff.
Kasey finally stops trying to push Trent away and things settle down for a while. Until, of course, Trent’s skeletons come out of the cupboard and throw everything in uproar. Will they ever reconcile?

If it wasn’t for the subject matter I’d think that perhaps it was aimed at a younger audience. Probably, they weren’t in mind when it was written, but I’d recommend this story to an older person who is not as confident a reader as your average Tom, Jack or Alex.  ( :

But, it’s a book and while it didn’t strike as true, it was somewhat adorable. And of course, there’s the matter of her sister…