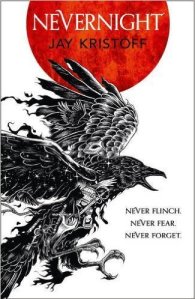 Destined to destroy empires, Mia Covere is only ten years old when she is given her first lesson in death.
Six years later, the child raised in shadows takes her first steps towards keeping the promise she made on the day that she lost everything.
But the chance to strike against such powerful enemies will be fleeting, so if she is to have her revenge, Mia must become a weapon without equal. She must prove herself against the deadliest of friends and enemies, and survive the tutelage of murderers, liars and demons at the heart of a murder cult.
The Red Church is no Hogwarts, but Mia is no ordinary student.
The shadows love her. And they drink her fear.

This is a massive book with a slow start, maybe the first 50-100 pages or so, but I loved it. I did have a horrifying moment there when I feared I was going to hate it, but boy did it pick up when it picked up!
It could be the way it’s written – with highly distracting foot notes, explaining phrases, events and people further (or just correcting assumptions the characters make). Some were boring, some were funny, all of them threw me out of the story but I think I learnt some important information from them so I guess they’re not completely useless? As the story really got going though there were less of them and then I think they stopped completely, which was fantastic.
Pro tip: If you’re struggling with this book, totally ignore the footnotes, or simply scan them maybe. I think one had something really important in it, the rest can be gone over again later…

It’s apparently been accused of being flowery, which surprised me. I even went back and had a look – I’d call it more epic than flowery.
What’s the difference?
Flowery feels like a bid to extend the word count, epic feels like it’s building your anticipation. It put to mind the Greatcoats series by Sebastien de Castell. Possibly heavy going but well worth a read.
Maybe I just like stories where a girl sharpens her skills and pulls down the offending world around her (it can be good with a boy too, it’s true, but girls are less expected and it’s far more entertaining to ‘watch’.)

I like that the story was being told to us by someone {thing?!} who knew Mia. Their motive was to ‘separate truth from rumour’ but I just liked that everyone and then a sentence was directed at us. Fourth wall break?! Or is it called something else in books? (for a book blogger I’m terrible with my terms…I really need to make myself a list, why can I never remember them?!)

I actually believed Mia was a trainee assassin. I’m not sure what it was – not the deaths and blood – the feel of it was believable even as young as she was, though I kept forgetting her age. We didn’t spend much time with her in her lessons, but they didn’t seem to spend any time learning about hand to hand fighting. I would have thought that the most important for an assassin. The ability to kill with nothing.but your hands. but maybe that was in the lessons we didn’t attend with her. Other things certainly were…

Jess seemed a little pointless to be honest, all mouth and no trousers. I can’t work out if she really was pointless or if it was just the way Mia dealt with her – which was pretty clever.
I loved Tric,  he was nice and sweet – not what a trainee assassin should be, true but he was a pretty good assassin! – and clever. But I think the main reason was because Mia did. I definitely liked her! There’s a pretty big question around her as well as this whole world. I hope it all gets addressed in this story. It seems like it is but things can change so quickly.
The Red Church is going to have plans, Mia certainly does. Then, of course, there’s the possibility of some sort of Destiny going on too.

She’s still quite young, it feels like there should be more than just the one year training, but I don’t think there is. I aslo thought that the teachers had pretty low count’s all things considered (like Mia’s count. Or is it just paid for targets?!), but I guess they can’t do both teaching and assassinations.

There was something that was slipped in there and hinted at that I saw coming, we now it but Mia doesn’t yet and I wonder how that will be explored. There was something else mentioned and that needs more clarification, I have no idea how that works.
This whole world is fascinating and I’m really looking forward to finding out more about it. And her powers and where they come from too! That’s a massive mystery I can’t wait to have solved!