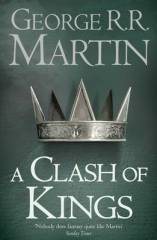 “If you start calling me m’lady even Hot Pie is going to notice. And you better keep on pissing the same way too.”
“As my lady commands.”
- Page 272

Time is out of joint. The summer of peace and plenty, ten years long, is drawing to a close, and the harsh, chill winter approaches like an angry beast. Two great leaders—Lord Eddard Stark and Robert Baratheon—who held sway over an age of enforced peace are dead…victims of royal treachery. Now, from the ancient citadel of Dragonstone to the forbidding shores of Winterfell, chaos reigns, as pretenders to the Iron Throne of the Seven Kingdoms prepare to stake their claims through tempest, turmoil, and war.
As a prophecy of doom cuts across the sky—a comet the colour of blood and flame—six factions struggle for control of a divided land. Eddard’s son Robb has declared himself King in the North. In the south, Joffrey, the heir apparent, rules in name only, victim of the scheming courtiers who teem over King’s Landing. Robert’s two brothers each seek their own dominion, while a disfavoured house turns once more to conquest. And a continent away, an exiled queen, the Mother of Dragons, risks everything to lead her precious brood across a hard hot desert to win back the crown that is rightfully hers.
A Clash of Kings transports us into a magnificent, forgotten land of revelry and revenge, wizardry and wartime. It is a tale in which maidens cavort with madmen, brother plots against brother, and the dead rise to walk in the night. Here a princess masquerades as an orphan boy; a knight of the mind prepares a poison for a treacherous sorceress; and wild men descend from the Mountains of the Moon to ravage the countryside.
Against a backdrop of incest and fratricide, alchemy and murder, the price of glory may be measured in blood. And the spoils of victory may just go to the men and women possessed of the coldest steel…and the coldest hearts. For when rulers clash, all of the land feels the tremors.
Audacious, inventive, brilliantly imagined, A Clash of Kings is a novel of dazzling beauty and boundless enchantment;a tale of pure excitement you will never forget.

What an appropriate title…

I got through this one a lot quicker than the other, probably because I spent many days listening to it to drown out background noise and help me concentrate, still, I pressed the rewind 30 seconds button so many times…

This was a lot more different than the show this time around. There were a few surprises in this and some things were VERY different. (That ending though!!)
Catelyn wasn’t nearly as annoying as she was in the first book, thank goodness! In fact she was just mopey and quite passive. I think she’d realised just how bad she’d been. She has had some revelations and she IS in mourning so there is that. I’ve also becoming a little board with Dany. Her time with the magicians was fantastic though! Like I said about book one, if you pay attention things are revealed…I didn’t quite get the future ones though. Perhaps I need to actually read it.
Tryion is just as fantastic as ever and I really enjoyed his kindness and cleverness – are these the characteristics that brought about the rumour that he was not a true Lannister? Poor guy has a horrific father and sister, it’s true.
Also really enjoyed Jon’s storyline, it’s really getting interesting! But so is Aryas. I really love her interactions with Gendry, Actually I just love Gendry, might have something to do with Joe Dempsie…  I’m an Arya/Gendry shipper, it has to be said, which is a little creepy as she’s only ten right now, but they’re not ship worthy quite yet in the books so that’s good. I look forward to many more of their funny interactions!
I felt sorry for Sansa, though not as sorry as I could have. She was somewhat silly in the first book. She didn’t deserve the treatment she got in this book however.

I didn’t understand Renly in the show to be honest and I don’t understand him here either. I thought, in the show, that Robert was the middle brother and therefore Renly made SOME sense at least, but in the book? Nope.
Also I really didn’t like Stannis. At all. Kind of for something he hasn’t done yet, to be fair, but what he HAS done hasn’t been particularly good either, no matter how he fluffs it up to himself.

And then there is Theon. You idiot, Theon. Oh well.

I’ve already started book 3, in fact I went right into it after book 2, which was kind of silly but really, when am I sensible about this kind of thing?! Again, I think that I got through this because it was an audio book, though I do have some hopes of reading a book or two – I think that they will be easier now that I’m into the story. But that might be re-read territory to be honest, I haven’t been doing much physical reading lately.