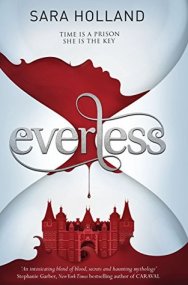 Thank you to Netgalley and the Publisher for the chance to read this book in exchange for an honest review.
Publish Date: 4th January 2018

Time is a prison. She is the key. Packed with danger, temptation and desire – a perfect read for fans of The Red Queen.

In the land of Sempera, the rich control everything – even time. Ever since the age of alchemy and sorcery, hours, days and years have been extracted from blood and bound to iron coins. The rich live for centuries; the poor bleed themselves dry.

Jules and her father are behind on their rent and low on hours. To stop him from draining himself to clear their debts, Jules takes a job at Everless, the grand estate of the cruel Gerling family.

There, Jules encounters danger and temptation in the guise of the Gerling heir, Roan, who is soon to be married. But the web of secrets at Everless stretches beyond her desire, and the truths Jules must uncover will change her life for ever … and possibly the future of time itself.

‘Sara Holland is a fierce storyteller. An intoxicating blend of blood, secrets, and haunting mythology, Everless gives new and terrifying meaning to the phrase running out of time.’ Stephanie Garber, New York Times and Sunday Times bestselling author of Caraval

My first book of 2018 is a 5 Voodoo book!
I gave it 5 Voodoos for several reasons.
The first was because I stayed up way past my bedtime reading it. I was tired but I lost 2+ hours in it’s pages, the second was because I missed bits by jumping forward. That doesn’t sound like a positive, but I can’t be the only one who, when pressed for time and holding a good book, skims ahead to find out as much as possible and then can’t possibly go back? I’ll no doubt re-read it and find out if I missed anything important then but right now I must keep going!

Also, I suspected Liam from quite early on and though there was more to it than I thought, that was quite fulfilling.
I’d have liked a little more of Jules’ thoughts about Roan to be honest. I mean, she clearly knew what was going on but did she pay attention? Or was that something I missed?
I’m guessing I either missed a ton of her thoughts or there was some inner monologue we weren’t privy to because there were a few things that showed a change of heart without showing how we got there!

The premise of this book really reminded me of the film In Time which I really enjoyed and that’s what prompted me to pick up this book. In conclusion they weren’t all that similar and with the back story within this world they’re nothing alike at all – the only similarity is that time and money are the same thing- time is used as currency.

Sadly I can’t tell you who my favourite character is because spoilers and while I doubt they will be in book 2 much (unless it’s a duology, please be a duology), I look forward to their return! I want them to have the chance to be themselves, I want to see who that makes them. I also can’t say who was my least favourite character – firstly, because I never quite built up to the hate that could have been, but also because spoilers – again!
Generally though I didn’t feel too connected to the characters. I’m not sure if it’s because I first started reading this book because the deadline was approaching rather than because I wanted to read it right now or because I read the second half so fast I jumped bits and generally missed getting attached but to be honest I only care about Jules and my favourite…Though there is a third that I could also become invested in.

With regards to the end, we’re not left with a cliffhanger but nor is it all nicely wrapped up, in fact you could say we’re left with a large amount of information, an unknown path ahead of us and the feeling we’re settling in for a good ride. I’m sad that I have to wait so long to find out what happens next but at the same time, I’m looking forward to re-reading this book and continuing on with part two around this time next year.