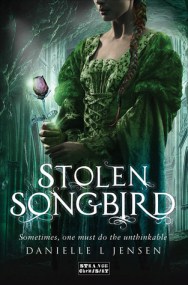 “We may have to crown you champion of knowing the least about the greatest number of topics, well done.” – page 199

Cécile is looking forward to her new life in the city with her mother, singing on various stages for anyone who will come to listen. But on her way home to celebrate, she is whisked away under the mountain to the city if Trollus, where the Trolls have been buried for over five centuries.
A prophesy has been spoken, of a union between a girl of her description and a Troll prince, that will finally set the trolls free. Cécile is unwittingly bonded in marriage to the prince, who seems to despise her for no more than that she is human. Her only thought is escape, but as the tolls are faster and smarter than she, not to mention their magic, she must bide her time.
But while she is waiting she discovers that there is more to the prince than she first thought. A rebellion is brewing amongst the half-bloods, half human half troll slaves to the full-bloods and Tristan is their leader. Determined to help the man she finds herself in love with, she hides his secrets as best she can, but the world of Trollus is far more political than she has had experience with before and not even Tristans love can keep her safe…

I really liked this book, it was remarkably clever, and I’m so fascinated with all the mysteries left unsolved so far, and as to the identity of the trolls themselves, oh so clever.
Where we left the city though, is precarious to say the least, mainly because we have no idea. We simply know something happened for we left with Cécile.

I liked the character development that went on with these two. Ok, not so much with Tristan, that was more of an unrevealing, but at the start Cécile is a quivering ball of scared. And at the end she’s a determined princess, bent on securing the freedom of her husband and those of his people that are downtrodden. I can just imagine her dragging the witch back to the city by her hair (though there’s clearly  more to the curse than we yet know) So I’m particularly confused as to why, in the second book she’s of in the city with her mother singing… but I guess we’ll find out! (I liked this book so much that, despite then end leading to a hated book two separation, I don’t actually mind! Shocking.)