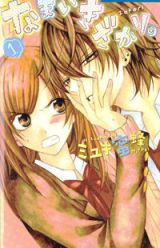 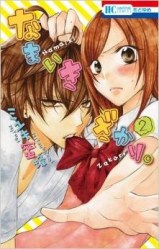 Title: Namaikizakari
Author: Miyuki Mitsubachi
Book: 1 and 2 of an ongoing manga
Genre:  shoujo manga (something like YA)
Found: via a picture on Pinterest!
Rating: 5 voodoos for them both

Machida Yuki is the oldest of 6 siblings and is far older than her 17 years. She is a second year and the manager of her schools basketball team. She took the position because she had a crush on [Kido-Senpai] a third year and the current captain of the team so that she could be near him. On the team is also Naruse Shou, a tall and somewhat immature first year. He suddenly starts paying attention to Yuki and at first she’s infuriated, convinced he’s just trying to annoy her with his confessions. He’s just the sort of guy she can’t stand. But he wont go away, he keeps trying to convince her she likes him too….and he may just be right.

I found this manga, oddly enough, through a pin on pinterest. The images were familiar and I was convinced it was one I’d read in the past but I couldn’t remember which. When I tracked down the name however, I realised I’d never even heard of it but I have to admit I really like this manga so far.
I enjoy both main characters, though I’d like to see more into the life of Naruse. I feel I’m more on his side, because while he’s quite in your face and a year younger than she is Yuki isn’t really giving him a chance. (even if she has a point about the rest of the team finding out)
She’s used to giving up her wishes in favour of her siblings and I think he reminds her if them a little. Though I think he sees more and would understand more than she gives him credit for if she would just share. I also think that she needs to learn to look past the mask he wears, realise it’s there as much as it is, because while he presents that unaffected front, he’s truly affected underneath. Though it would really help his case if he gave her a few hints…
I feel sorry for Naruse, he could do with some support from Yuki but she doesn’t quite know how to go about it. They’re a good match though and if they just hold out I know that not only can he give her a fighting spirit, she can mellow him out. I can’t wait to read more and watch their romance develop. I do hope it’s not one of those 24 book long series where they take forever to get together then keep breaking up. Honestly, manga is worse than western YA, there’s just as many – if not more – ups and downs but you’re less likely to have a guaranteed HEA at the end. Bring me the next book!