Top Ten Tuesday is a weekly feature hosted by The Broke and the Bookish that other bloggers are welcome to join in, to create Top Ten lists on varying topics. This week it’s Top Ten Books From My Childhood (Or teen years) That I Would Love To Revisit.

I’m pretty sure this is a novelisation of the film, they’re too similar for it to be the other way around. We have two copies, a paperback and a hardback but I didn’t buy either of them. I loved the film and I remember finding these on our bookshelves. I even read both copies to check they’re the same. It was through the books that I found the name of my favourite character ( the one in the top hat) Aces!

I loved these books, we even has them as audio books to listen to in the car. There’s at least two or 3 books at the end of the series I’ve never read. However we own them now and I have them on my to-re-read shelf on one of my bookcases so their days are numbered!

3 Shadow of the Minotaur
by Alan Gibbons

This one was part of the Trident Award I participated in while at secondary school. It was one of my favourites I think and I subsequently bought it and it’s sequels. Moving my books around at the weekend caused me to come across these again.

I read the first three books of this and I loved them. I spent ages hunting for news of the next book, which was apparently published the year after I stopped hunting…There are now 9 of these and I really want to read them all!

5 The Seer and the Sword
by Victoria Hanley

I read this at school and I loved it so much that when I was thinking about the story again a few years back I bought it for my own. Recently I discovered it was part of a series which I now own. I have to read them soon! 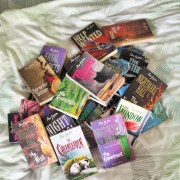 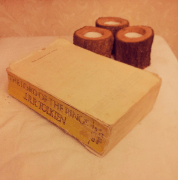 These were the first books I read all by myself. My Gran had the whole set. All 35 books of them. And she would let us sit and read them, but only if we were good,quiet, had clean hands and remembered to put them back away in the right place, in the draw, after we had finished. It felt like a secret we were allowed in on. I really loved these. I’d like to see if they stand up to the memory I have of them.

These were Young Adult Horror books from a variety of authors and I couldn’t get enough of them while I was in High School. I even used to read them while in class, you know, in that oh so subtle book inside a book way!

8 The Lord of the Rings
by J R R Tolkien

As you can see from the picture above this book is well loved. When my brother and I were little our Dad used to read to us before bed and it always felt so magical. Dad was very good at all the different voices… I think that’s why it worked. I’d like to re-read this now I’m older.

Wow 1994? Seriously? Fine… whatever… anyway I wanted all of these when I was 12 (that was not in 1994.. just in case you were wondering) I still have all of my set. I remember these being fun and full of teen angst and some really unbelievably silly situations. I’d probably compare them to Angus Thongs and full-frontal snogging. Another series I loved as a teen. (And Yes this is the same author of Animorphs! Who would have thought!)

This was one of my first ‘dirty books’ and helped me understand a lot about sex… In my head I remember this as being graphic and I remember hushed conversations with my friends about it, with lots of giggling… I wonder now whether it was just my naivety that made it seem that way or whether it was actually quite graphic for its time?

One comment on “Top Ten Tuesday: Books From My Childhood (Or teen years) That I Would Love To Revisit”