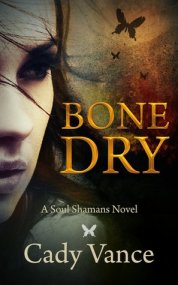 Thank you to Cady Vance for a chance to read this book in exchange for an honest review.

Sometimes it isn’t as easy as choosing right or wrong.
Sixteen-year-old Holly Bennett is a comic book nerd, a con artist, and a shaman. Most days Holly wishes she could trade in her power of spirit communication for something more useful–like fireballs or Wolverine claws. She knows spirits aren’t exactly Casper the Friendly Ghosts. They’re dangerous beings from Lower World who snack on human life, and messing with the magic from their world is an express ticket to big trouble. But when a shaman sticks her mom’s mind between their world and ours, Holly becomes the unexpected breadwinner in the family. She uses her burgeoning shaman powers to set up fake hauntings and “banish” the so-called ghosts from her wealthy classmates’ bedrooms. For a fee, of course.
When actual spirits start manifesting, Holly discovers that other shamans have come to town, summoning life-sucking spirits for their own ends. And the newcomers may just hold the clue Holly’s been looking for–the one that can release her mom’s mind from its Lower World prison. With the help of both a cute web comic artist and her partner-in-con, Holly plots to take them down, throwing her into a whirlwind of speedboat getaways, breaking and entering, and astral projections into the spirit world. And as her mom’s mind slips further away, Holly has to fight to save her, and the rest of the town, before they get sucked into Lower World permanently.

I’ve only read one other Shaman series and that would be The Walker Papers series by C. E. Murphy (or at least the first three books. Apparently there are now 9…) which was A LOT to live up to because I loved those books. This didn’t quite make it, but it sure did it’s damnedest!

Just about a third of the way in things picked up rather dramatically and I lost a whole morning finding out what happened next, because I needed to! A few times something happened that I thought would lead to a stereotypical “oh no! We’re in trouble!” moment, but actually they didn’t which I was SO happy about.

The story is told in first person, from Holly’s point of view and to be honest she was a little annoying. There were similes or metaphors or comparisons that really didn’t need to be there (possibly it’s because I’m older than her that I found this annoying??) and really I’m not impressed with what she did. Oh no. I’m not talking about the cons, a girls got to eat, but the fact she ignored every single bit of information in her mothers last note about what I will call The Artefact (to save having to add spoiler warnings). I mean really, you have a camera phone yes? Use that function! I know time was short at this point, but really, you’re smart! Use your brain!
Whoops, rant over.

I think my favourite character may be Holly’s mum. I know we don’t get to see much of her and she’s also kind of an idiot, not teaching her daughter all the important stuff, but she seemed pretty amazing before and I hope we get to see more of this past her as we continue through the story. There’s so much we don’t yet know and hopefully we’ll learn right alongside Holly.

This was an interesting novel and I’d like to see where the story goes.